Messing About In Cars 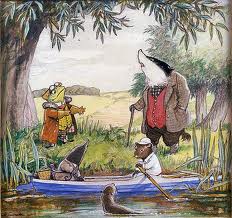 This isn't going to be a rundown of why I like Top Gear (I do, very much) or what the best episodes have been (the Vietnam trip).  What I wonder about is why it's so damn successful. Other reality shows do humour, such as Mythbusters, and various programs on the Speed Channel offer more hardcore tech info.

The secret to the show's appeal is found in the picture on the right. Yes, Top Gear's success is based on the hosts' uncanny similarities to Mr Toad, Ratty and Mole of The Wind in the Willows. These three iconic characters from Enlglsh kids lit are alive and well in the shape of Jezza, Hamster and Captain Slow. Even their nicknames sound like something from a childrens' story, and Richard Hammond and James May actually look like, respectively, Ratty and Mole. Jeremy Clarkson clearly looks like a badger, but his DNA is pure Mr Toad: self-important, short attention span, in love with speed above all else. Hammond is the dreamer, the man-child who only wants to play, and James May is the steady, practical, one-step-at-a-time Mole.

Now it's understandable if UK viewers make this subliminal connection with the Top Gear boys, but what about the rest of the world? What's their excuse? I think the answer is that Toad, Ratty and Mole are such brilliant, universal characters. Everyone works or lives with one of the three, and all of us, at one time or another, have been a Mr Toad, who, for reasons of psychological clarity, could have been called Mr Id. So the success of Top Gear isn't entirely down to crashes, stunts, celebrities and "cocking about", it's also thanks to three beloved literary characters brought to life.
Posted by Cary Watson at 4:31 PM