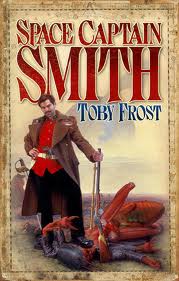 If you made a guess based on the cover of this book that what awaits you is something seriously silly, you'd have guessed right. What we have here is a ripping yarn (sci-fi division, steampunk regiment) about an army officer named Isambard Smith who proudly serves the British Space Empire in the 25th century. His sidekicks are Polly, an android sex toy and pilot of Smith's ship the John Pym, and Suruk the Slayer, a bloodthirsty alien warrior and Smith's best friend. In this, Smith's first adventure, he must find and protect Rhianna Mitchell, a hippie with special powers. Smith is protecting her from the Ghast Empire, an evil civilization of ants bent on destroying the British Space Empire. Smith, a two-fisted, less dim version of Bertie Wooster, muddles his way to success and gives the Ghast a damn good thrashing.

But enough about the plot. The success or failure of a comic novel is almost entirely dependent, from the reader's perspective, on the quality of the comedy, not the plotting; P.G. Wodehouse's plots weren't especially clever or original, but that doesn't detract from his position as arguably the greatest writer of English comic fiction. The benchmark for comic writing in the sci-fi/fantasy world is, of course, Terry Pratchett, and on the Pratchett-o-meter Frost scores a very healthy 8.5 out of 10.

Frost, like Pratchett, loves to lampoon popular culture, drop in literary references and quotations, and forge some really diabolical puns. Frost is particularly keen on referencing movies, and there's one especially clever bit in the book built around A Clockwork Orange, not to mention comic riffs on Blade Runner, The Matrix, and even, I think, The Wild Bunch. And Smith's friend Suruk is very clearly modeled on the alien nasty from Predator. Frost's riffs on pop culture are great fun, but the guy can also craft a really clever comic sentence. Here's Smith complaining to a superior about not getting a spaceship to command:

"You know jolly well that I'd eat my own pants for a chance to get back into space, and yet here I am, still sitting here, wearing them."


Wodehouse himself would have been happy to have penned that sentence. Frost is definitely a very funny writer. What holds him back from Level Pratchett are some double entendres that are a bit too Carry On-ish, and an occasional failure to hold back from making the obvious joke. I will definitely read the rest of the books in this series, God Emperor of Didcot and Wrath of the Lemming Men.
Posted by Cary Watson at 1:20 AM