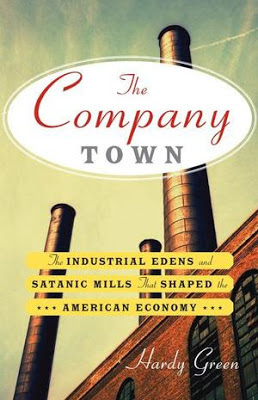 As an examination of American towns that have been created or taken over by a single company, author Hardy Green has done a great job of shining a light on some odd and forgotten aspects of the history of American business. Hardy gets the mix between academic and anecdotal history just right in telling the story of places like Hershey, PA, the chocolate-flavored hometown of Hershey Co.; Lowell, MA, a textile centre that offered young, single women a rare chance to enjoy economic independence in the early 19th century; and various mining towns that were often part-town, part-concentration camp.

What virtually all these towns and cities have in common is a relatively short lifespan that has the arc of a three act tragedy. They start life thanks to entrepreneurial zeal and inventiveness, and the market demands of a rapidly expanding economy. Next comes a middle-aged period of affluence that's usually marred by violent fury and sclerotic intolerance for any kind of union activity or worker militancy. Last comes decrepitude and death as changing market conditions or Wall Street raiders shut down or cannibalize the business that keeps the town alive. Gary, Indiana, is possibly the best example of this process. Gary was created in 1906 by U.S. Steel, which turned 4,000 acres beside Lake Michigan into one of the biggest steel-producing centres in the world. There were the usual vicious battles with unions along the way, and by the 1950s Gary was one of the epicentres of the post-war American economic boom with a population approaching 200,000. Today? Gary is now a virtual ghost town, widely regarded as one of the worst places to live in the US. Check out this article on Gary from the Daily Mail.

One facet of American history that gets little attention is the sheer ruthlessness with which business and governments at all levels tried to crush any kind of workers' organization in the first decades of the last century. How ruthless? In 1921 in Logan County, West Virgina, a pitched battle between protesting coal miners and a mixed force of police deputies and mine guards left 80 to 130 dead, most of whom were miners. There are a dozen similar stories in The Company Town, and it's amazing to think that these dramatic and bloody incidents aren't part of what could be called popular history.  There have been countless films made about Dillinger and the like, but the depredations of bank robbers don't begin to match the violence of the contemporary fights between labour and capitalists. Prohibition, gangsters, flappers, the Jazz Age, the Depression, these are the big stories in American history from 1900 to 1940. The low grade civil war between business and government on one side, and organized labour on the other, rarely gets a mention, which speaks to how friendly historians and Hollywood mythmakers have been to corporate America.

Although some company towns benefited from a certain degree of paternalistic benevolence, The Company Town is mostly a sad, sometimes tragic, story of how capitalism has continually seen labour as just one more form of raw material in the industrial process.
Posted by Cary Watson at 12:20 PM