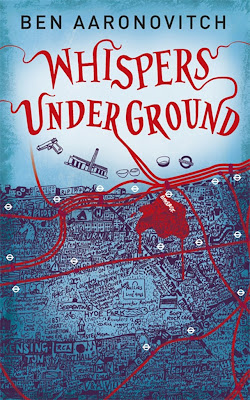 For those of you unfamiliar with Ben Aaronovitch's supernatural mysteries featuring Peter Grant, let me get you up to speed. Grant is a cop with the Metropolitian Police. He's attached to the Folly, an unofficial unit that investigates supernatural crime in the greater London area. Oh,and Grant's also an apprentice wizard. Now if all this sounds distressingly like a "'allo, allo, allo, what's all this, then?" version of Harry Potter, it most definitely isn't. In fact, Grant never misses an opportunity to make a joking reference to various famous fictional wizards and the like. The Grant novels are first and foremost police procedural mysteries, and this one is the best of the bunch.

The previous Grant mysteries, Rivers of London and Moon Over Soho, were smart, written with wit and imagination, but suffered from some plotting that went slightly off the rails. That's not a problem this time around. A man is found murdered in Baker Street tube station, stabbed with a pottery shard that carries with it a whiff of magic. Grant's investigations lead him to, among many places, the Tate Modern, a goblin market, and an underground community inhabited by...but that would be telling. Suffice to say that the action is brisk, exciting and full of invention.

There are two things that make these novels appealing; the first is that they are among the best police procedural mysteries currently on the market. Detective Grant doesn't spend all his time running around using magic spells and so on; in fact, the use of magic is fairly restrained. Grant utilizes all the resources of the Met, and does so in an enthusiastic and believable manner. Also, Grant really likes his job, and the pleasure he takes in his work is a refreshing and delightful change from the usual mob of morose coppers cluttering up crime fiction. The other aspect of the Grant stories that's praiseworthy is the way in which Aaronovitch brings London to life. The Big Smoke isn't just a backdrop to these mysteries, it's really a main character. Aaronovitch is more than a little bit in love with London and he brings that passion to every page of his novels. He also deserves credit for showing a London that's not a cliche mix of Victorian architecture and Dickensian characters, which is usually the result when you mix London with a hint of the supernatural. This London is vibrantly multicultural. Grant himself is mixed race, and is more comfortable in tower blocks and council houses than a drawing room or private club. Now if only Aaronovitch could churn these mysteries out faster.
Posted by Cary Watson at 7:08 PM