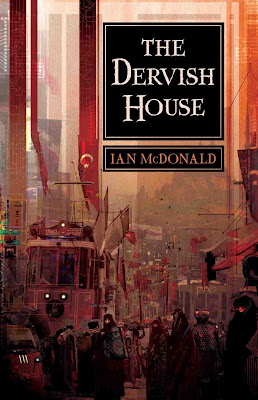 About halfway through The Dervish House I came to the realization that science fiction and historical fiction are two sides of the same coin. Both kinds of fiction attempt to construct alternate, but plausible, realities. Historical fiction tries to imagine how people thought and acted within a framework of historical truths. The trick is getting inside the heads of people who lived by a different set of values and beliefs. With science fiction the writer is imagining new worlds and technologies; the challenge comes in making the facts of these new worlds seem plausible and logical. With both kinds of fiction the authors have to create a suspension of disbelief: reader's have a natural resistance to futures that seem too unlikely or characters who are "out of character" with their historical setting.

The historical fiction writers pick up lots of literary awards (take a bow, Hilary Mantel), and generally get far more respect than the guys and girls working the side of the street with the spaceports and multi-limbed aliens. I'd say the history crew has an easier time of it. Everyone can agree on known historical facts, but it's always easy to pick holes in the tiniest details of a fictional future. I haven't read any sci-fi for quite a while, mostly because every time I've picked one up the writing is usually pretty weak. Sci-fi seems to be one of those genres, like romance and westerns, that has an undemanding audience. Give them the genre "bling" of space travel, time warps, freaky aliens, and they're satisfied.

The Dervish House is definitely sci-fi, but it's a resounding success because Ian McDonald has built a strong foundation of plot and character, and wraps some really fine prose around the whole thing. Its strength as a novel can be judged by the fact that if you removed all its science fiction elements (and there are lots) it would still be a wonderful book. The story is set in Istanbul in 2027 and follows the lives of a half-dozen or so characters who live or work in the building of the title. The cast includes a retired economics professor; a commodities broker; a dealer in antiquities; a demented criminal; a marketing consultant; and a 9-year-old boy with a heart condition. There's a separate plot line for each character, and all the lines eventually come together in some unlikely ways. Some of the stories include the search for a corpse mummified in honey, a financial scam, a terrorist plot, and the launch of a world-changing technology.

McDonald's goal isn't to show off some gee-whizz ideas about the future; what he's trying to imagine is how an old, conservative culture rich in traditions and customs manages the transition to a more Western mode of life. In this regard Istanbul is the main character of the novel. McDonald absolutely immerses us in an Istanbul that's trying to hold onto the past while at the same time running headlong into the future. This Istanbul is now part of the EU and appears to be at the forefront of nanotechnology. The characters, like the city, are dealing on a personal level with the changes that are morphing Istanbul into one of the key cities of the world.

Where a lot of science fiction takes pains to map out and describe its new worlds before the action gets underway, McDonald simply throws us in the deep end. The reader has to adjust quickly to a novel about Istanbul and Turkey that feels like it was written by a Turkish writer for a Turkish audience. This isn't Istanbul and Turkey For Dummies. Like the characters, we're expected to adjust on the run to new ideas and new technologies crashing into our traditional world view. And the world McDonald creates has the detail and energy that Dickens gave to London, or Zola gave to Paris. And the sci-fi bits are masterfully integrated into the story; there are none of those moments common to the genre where the narrative comes to a screeching halt for a dissertation on futuristic science and technology.

As modern and sophisticated as The Dervish House is, McDonald can't resist having his various plots and characters come together at the end in a manner that feels very 19th century. It's all cleverly done, but it feels a bit forced and the happy endings provided for most of the main characters seem out of step with the rigorously realistic tone of the rest of the book. Aside from a slightly bumpy finale, I'm rating it as one of the best sci-fi novels I've ever read.
Posted by Cary Watson at 1:12 PM