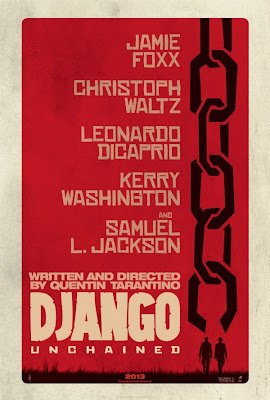 Based on Django Unchained, it seems fair to say that Quentin Tarantino isn't interested in making films anymore, or at least not the kind that people have traditionally recognized as films. Django isn't so much a film as it is a loosely stitched together series of moments and bits that are meant to be appreciated by themselves, totally apart from any kind of coherent narrative. The audience for this kind of film? The  demographic that delights in discovering and chattering about tropes, meta moments, homages, genre references, and tributes to other films. If that's the kind of film you like Django is an absolute buffet of genre cliches and, dare I say it, tropes. For the rest of us this is a jaw-droppingly bad piece of filmmaking that goes on and on and on. There are so many things wrong with Django it's going to be easier just to narrow it down to a sampling of the things that annoyed me the most:

Talk is way too cheap

Early in his career Tarantino was justifiably praised for his dialogue. If you can be damned with faint praise, it appears that in Quentin's case you can also be damned with too much. He's turned into a scriptwriting windbag. Scene after scene has characters talking at such length it would be more accurate to call this script a Hansard. Not only are most scenes grotesquely overlong, some are completely gratuitous.

Django is supposed to be some kind of tribute/homage to spaghetti westerns, but in truth the story turns out be more of a drawing room comedy of mayhem. The key visual element in any western is the great outdoors. The idea of vast, unpopulated spaces was one of the reasons for the popularity of westerns in small, overpopulated Europe, hence the rise of the spaghetti western. Tarantino has no eye or enthusiasm for shooting outdoors. Just to let us know we're watching a western he has Django and Schultz ride past a herd of buffalo. OK, fine, there's that box ticked. And then several scenes later we see them go past a herd of elk. Oh, right, I almost forgot I was watching a western. That's the extent of the director's enthusiasm for western landscapes. Most of the film takes place in smallish rooms and the tone in the latter half is more blacksploitation than western.

Foghorn Leghorn was a technical advisor on the film

Yes, most of the actors seem to have taken voice lessons from Foghorn Leghorn, especially Leonardo DiCaprio. And Don Johnson gets to play a plantation owner in full Colonel Sanders regalia. This is as subtle as things get in the film.

If I sit down to watch one of the Saw films or something by Dario Argento I expect and demand buckets of blood. But a western? For no clear reason Tarantino films his shootouts as though they were scenes in a horror movie. When bullets hit flesh in this universe they release a geyser of blood that travels yards. I know, I know, it's a homage to Peckinpah, but he didn't make blood a star in its own right.

Why are there so many empty beds in the Old Actors' Home?

I can answer that: it's because Tarantino dragooned Tom Wopat, Franco Nero, Russ Tamblyn, Lee Horsley, and Bruce Dern into making cameo appearances. Why? So film geeks can play Spot The Former Star. It's a lot like the Where's Waldo books but without the popcorn. These actors don't add anything to the film except a distraction.

Believe it or not, some critics and Tarantino apologists/fans have been furrowing their brows and saying that Django delivers a strong lesson about the evils of slavery. Well, if you've been living in a cave for the last 100 years or so it might be news that slavery was a bad thing, but for the rest of us it's a yawn-inducing revelation. And Tarantino isn't really interested in any kind of serious look at slavery; his interest in slavery only extends to referencing tawdry exploitation flicks on the subject like Mandingo and Drum.

For someone who worships at the temple of genre films, the nastier and cruder the better, Tarantino proves to be something of a prude. He's happy to show wholesale quantities of graphic violence, but sex and nudity is something he seems uncomfortable with. All of his films are G-rated when it comes to sex. T & A is a big part of all the genres referenced in Django, especially the slave-themed ones, but Tarantino skates right around some obvious opportunities for naked fun. How boring.

Remember those parody film franchises like Scary Movie and Hot Shots? Tarantino must have decided to honour that genre as well because that's the only explanation for a farcical sequence with Don Johnson and Jonah Hill (yes, Jonah Hill) as members of a Klan-like posse that gets into an argument about headgear. The scene is supposed to be farcical and off-kilter, just like some of the conversations in Pulp Fiction, but it's written and filmed so badly you have to wonder if the Wayans brothers weren't in charge of this part of the film.

For a film that's supposed to have a strong black power vibe, at the end of the day it's mostly about the white characters. Jamie Foxx as Django gets to shoot a lot of white folks, but it's Christoph Waltz and DiCaprio who get almost all the dialogue, and Waltz's character is very clearly the brains of the outfit.

Correct me if I'm wrong, but don't western action sequences have their own particular grammar and tradition? Not in this one. The shootouts owe more to Scarface and John Woo than Sergio Leone. And they're dull. No style, no imagination; Django just draws his gun and mows down scores of blood bags southerners.

Does Tarantino have a Screen Actors Guild card?

If he does, someone please take it away from him. Quentin makes one of his unfortunate acting appearances towards the end (he gets blowed up real good) and this time he treats us to an Australian accent. Why an Australian accent? Don't ask, because you might also begin to ask what a German bounty hunter is doing in the Old West.

There's one good thing in Django and it's Samuel L. Jackson. He plays an elderly, evil house servant and what little wit and energy the film has is provided by him. But that's always the case with Jackson, isn't it?
Posted by Cary Watson at 1:26 AM

Thank you, thank you. I haven't seen it, but I've been complaining for years about Tarantino inflicting (bad) genre tributes on us as if they were real movies.
BTW, I came here from reddit. Your site is duly bookmarked. Kudos.

Thanks, Sue. I'm afraid Tarantino might go down as one of the great, wasted talents in Hollywood history.

I have not seen the movie, but I think on principle that Quentin Tarantino movies ought to be called bad at every opportunity. And you're bang on about his acting appearances. They're bloody excruciating, mate.

Peter,
The only director who ever got away with cameos in his own films was Hitchcock, and he always kept his mouth shut. Take a lesson, Quentin.

I naturally thought of Hitchcock when I read your remarks about Tarantino's acting. The performance that sticks in my craw happened in one of the Robert Rodriguez movies, and it reminded me a loud, clownishly obnoxious drunk who thinks he's the most entertaining thing in the world.

Peter,
That would be Dusk til Dawn, a loud, obnoxious vampire movie with George Clooney, and, yes, Tarantino was at his worst in that film; he actually had the gall to take a supporting role. I believe Samuel L. Jackson has said on several occasions that Quentin always wanted to be an actor rather than a director, but that he should give up the acting. Now.

This is a wonderful film - it is, but once in a while someone needed to tap Q on the shoulder and tell him to ease up off the gas. A master and a genius, no doubt, but sometimes the Emperor has no clothes too.

A tap on the shoulder? More like a kick in the shins.