Book Review: The Great War for Civilisation: The Conquest of the Middle East (2005) by Robert Fisk 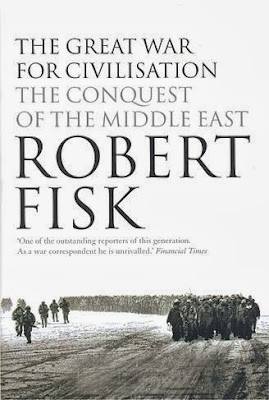 It takes a strong stomach to read this massive history of the Middle East from the Iran-Iraq war up to the second invasion of Iraq in 2003, and not just because it's filled with graphic descriptions of the atrocities inflicted on millions of people with weapons as various as knives, cluster bombs and poison gas. What's really stomach churning is the litany of stupid, racist, cynical and plain old murderous political decisions that have turned the Middle East into a perpetual battleground of competing ideologies, religions, sects and dictators.

Fisk takes a scattershot approach to his history of the region, jumping backwards and forwards in time to chronicle the wars and conflicts in Algeria and Aghanistan and everywhere in-between. This non-chronological approach has drawn disapproving frowns from some critics, but this structure is, I think, intended to reflect Fisk's career as a journalist; always leapfrogging from one bloody crisis to another in the Middle East and North Africa. Also, this is primarily a work of journalism rather than a historical document, although Fisk certainly provides all the needed historical background to the various conflicts he's covered. And his history of the Armenian Genocide strikes a perfect balance between brevity and telling details.

There are several themes that Fisk returns to throughout the book, chief amongst them is the fact that the modern Middle East is largely the creation of the West, and therein lies the root of many of its problems. Today's national borders in the region reflect decisions made by colonial powers in 1919, and despotic regimes in Iraq and Iran were, at various times, installed or approved of by the US and the UK, the chief power brokers in the area after WW II. And of course the most contentious Western creation is Israel, which was essentially imposed on a politically helpless Palestine. But more about Israel later. It's almost a  given that frictions and conflicts in the region have their basis in reckless or ignorant decisions made in Washington or various European capitals.

In relation to the above point, Fisk makes it clear that the West has shown a remarkable ability to befriend any and all dictators who are willing to side with Western interests. Saddam Hussein is the poster boy for this Machiavellian strategy. Once the Shah of Iran was deposed from his throne and his role of favoured regional "strongman," Hussein became the new strongman in town and was toasted and feted in world capitals of all political stripes. He tortured and gassed his own people and started a war with Iran? No problem, as long as he's got oil to sell and arms to buy, and as a bonus he's eager to kill lots and lots of Iranians by any means available. This diplomatic formula has been repeated with a score of dictators in the region, which has simply led to a hardening of anti-Western attitudes in the general population. The average citizen of the Middle East can see very well who's propping up or applauding his local despot so it should come as no surprise that Islamist and nationalsit parties (the political groups most likely to be loathed in the West) are able to attract support in the region.

Fisk's book also makes it clear, even if he doesn't say so directly, that the Middle East is, perhaps, ungovernable in the sense that we in the West think of "good" governance. The region is so riven with religious, ethnic and sectarian conflicts, not to mention sub-layers of conflicting tribe and clan loyalties, that it's hard to see how stable government can exist for any length of time, particularly when so many of the societies are nursing toxic fears and grudges leftover sfrom recent wars. Even Israel, which is reflexively offered up as model of statehood in a sea of corrupt and dictatorial regimes, is beginning to fracture along ultra Orthodox and secular lines. As bad as the recent past has been for the Middle East, the future, it seems, could be even worse.

Speaking of Israel, Fisk misses no opportunity to record Israel's crimes and misdemeanors within and without its borders and its tail-wagging-the-dog relationship with the US. His harsh criticisms of Israel have, predictably, caused him to be branded both an anti-semite and an enemy of America. The fact that Fisk's criticisms are no different than those voiced by Israel's homegrown critics (see Ilan Pappe's book on the ethic cleansing of Palestine here) is ignored by Fisk-bashers. Fisk eloquently and relentlessly makes the point that Israel's policy of displacement, colonization and persecution of its Palestinian citizens is glossed over in the West, and its war crimes are held to a different standard than those committed by Palestinian groups. More dangerously, Israel's iron hold on US decision-making in the region has hopelessly compromised any diplomatic initiatives the US undertakes.

The book's defects can be boiled down to two issues: the first is that Fisk's tone is sometimes too hectoring, too much the sarcastic Old Testament prophet. The other problem is that Fisk picks some cheap and easy targets for his wrath. Is anyone surprised that arms merchants don't give a toss about what happens to their deadly merchandise once it goes out the factory door? Apparently Fisk is, and so two sections on the so-called merchants of death end up feeling rather pointless. Other than those issues, this is, as they say, essential reading for any understanding of what has made the Middle East the cockpit of the world.
Posted by Cary Watson at 6:20 PM