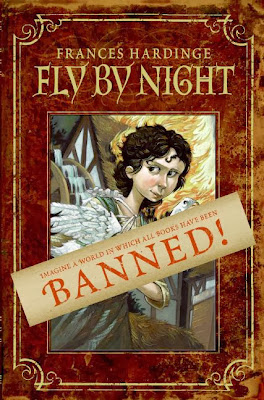 At an early stage in Fly by Night the reader stumbles upon this passage:

"The path was a troublesome, fretful thing. It worried that it was missing a view of the opposite hills, and insisted on climbing for a better look. Then it found the breeze uncommonly chill and ducked back among the trees. It suddenly thought it had forgotten something and doubled back, then realized it hadn't and turned about again. At last it struggled free of the pines, plumped itself down by the riverside, complained of its aching stones and refused to go any further. A sensible, well-trodden track took over."

That anthropomorphized path has nothing to do with the plot, and objectively speaking it's a superfluous piece of writing, but it's what marks out the divide between the average writer and an exceptional writer. Hardinge is firmly in the latter camp. Fly by Night is an alternate reality yarn set in an English-y country of the 18th century in which a plucky young orphan, Mosca Mye, becomes a Victim of Fate and Circumstance at the hands of Scheming Vagabonds, Rebels and Monarchs. Harsh Words are spoken, Dastardly Plots uncovered, Appalling Crimes committed, and Revolution fills the air. And there's a goose.

Considered as a whole, the novel doesn't break any new ground in YA fiction. Orphans, plucky or otherwise, are a staple of this kind of story, and, just as inevitably, this particular orphan plays a key role in the unraveling of various baroque plots. Hardinge's plotting is top-notch, but what sets her apart is the sheer recklessness of  her imagination and her ability to put her creative thought bubbles into prose. I don't read books like this to add to my knowledge of the psychology of female orphans; I read them for fizzy explosions of brilliance like the passage above. Hardinge doesn't stint with the clever, artful prose, and the reason I quoted that section is that it's a good example of her intemperate imagination. It doesn't influence the plot, but it brings joy if you have any taste for witty, clever prose. Hardinge clearly got an idea that paths can seem to have a will of their own and decided that this concept needed to see the light of day on the printed page. Is it necessary? No, but beauty in literature should always trump utility..

Fly by Night is another YA title that cries out to be read by an older audience. Some of the sharpest writing today is being done in the Teen and YA field,  but, unfortunately, too many adults would rather be seen reading a James Patterson novel than be caught with a "kids" book in their hand. Go ahead, take a chance on Hardinge, Philip Reeve, Geraldine McCaughrean or Melvin Burgess.
Posted by Cary Watson at 3:26 PM