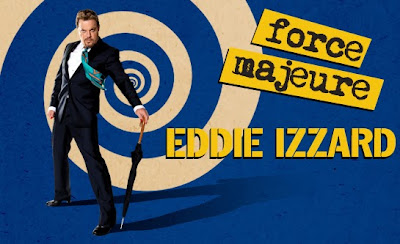 Last week I saw standup comedian Eddie Izzard's force majeure show in Toronto, the second time I've seen him live. Izzard is something of an outlier among comedians, and that's what's given him a loyal following that could roughly be described as bourgeois bohemian. Izzard is a remarkable mix of mime, comic impressionist, surrealist humorist and jokester. He brings an armoury of talents on stage and uses them all brilliantly. But what really sets him apart, and might account for his devoted following, is his humanism, his political philosophy, and his uniquely British voice.

Izzard's standup routines are as funny as you'll find anywhere, but they're also a strange and giddy mix of history lecture and philosophizing. I might be making him sound dry and dull, but rest assured these are not G-rated performances and laughs are always his first goal. He's probably the only comedian who would launch into a routine with a brief discussion of Charles I of England (complete with relevant dates), and therein lies Izzard's difference. Most standups are in the business of making fun of people, whether it's themselves, the audience, or eternal bull's eyes like politicians, celebrities and types of people such as the fat, the stupid or minorities. Izzard lampoons ideas. Big ideas. Topics like nationalism, fascism and religion are passed through the filter of Izzard's absurdist humor to emerge shrunken, naked and exposed to ridicule. Izzard's loosely-observed goal with these routines is to show up the anti-human nature of most ideologies. This is where his comic style complements his humanist outlook perfectly. (FYI: The rest of this paragraph is cribbed from my review of Goblins by Philip Reeve) Izzard specializes in a distinctly British form of humor that revolves around the subversion of anything or anyone that seems overly proud, serious or powerful; with this kind of humor the self-important and mighty find themselves humbled or embarrassed by common sense, the unavoidable facts of life, and bureaucratic inflexibility. Think of it as the revenge of lower-middle-class values. It's a comic philosophy that seems in tune with thoroughly British concepts like "muddling through" and "the Dunkirk spirit." It's also the perfect form of humor for "a nation of shopkeepers." In contrast, American humor shows the high and mighty being flattened by anarchic proletarian violence: think the Three Stooges and Adam Sandler. Izzard's justly-famous Death Star Canteen routine (clip below) is a textbook illustration of his style:

Izzard is quite probably the only comedian working today who frequently tosses around the word "fascist" and regularly references Hitler. For Izzard, the insanity and horror of  fascist ideology is like a loose thread that must constantly be pulled at. This seems to tie-in to both his political aspirations (he aims to run for mayor of London one day) and his oft-expressed pride in being a European. Izzard has often spoken in his routines about the positive values of European union, but he seems aware that Europe still can't escape the shadow of fascism thanks to political parties like Greece's Golden Dawn, the EDL of England, the National Front in France, and a half-dozen other similarly jackbooted groups. Izzard doesn't really go after contemporary political entities but he wants to remind his audiences that there are still monsters lurking in the closet.

For his all pro-European outlook, Izzard has an incurable fondness for the popular pleasures of British culture. He references English beauty spots like the South Downs, classic British films such as The Italian Job, and his vocal impressions are solidly RADA. For audiences outside the UK, especially for those of a certain age living in the Commonwealth, Izzard provides a pleasant reminder of a time (not so long ago) when popular culture was synonymous with British culture. He's not, however, some kind of affable purveyor of Brit-themed nostalgia; Izzard's wit and worldview is much too subversive for that. Eddie has a non-mawkish affection for his country that simply can't be repressed.

It seems that at some point in the near future we're going to lose Eddie Izzard the comedian to politics, which is wonderful if you're living in London, but a disaster for the rest of us. If you're new to Izzard he has a fair-sized back catalogue of performances available on DVD, and unlike the vast majority of standups his routines bear up to multiple viewings.
Posted by Cary Watson at 11:59 AM

You're right. His parents were British and they moved back to the UK when Eddie was one.