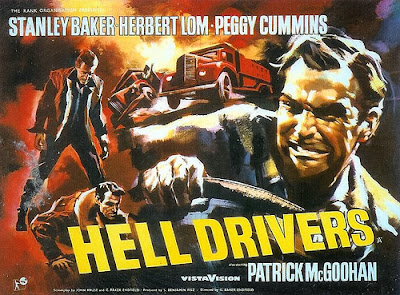 Henri-George Clouzot's The Wages of Fear was an instant classic when it came out in 1953. His visually powerful story of desperate men ferrying nitroglycerin over treacherous roads in South America was ultra-tense and drenched in existential despair. A producer in England must have seen it and thought, "Hey, let's move that story to England, make a few changes, and with any luck we can shoot it over the course of a couple of weekends." Hell Drivers is the bastard offspring of Clouzot's film, and while it's far from a classic it's well worth watching and has a jaw-dropping collection of Brit thespians making their initial forays into feature films. More about that later.

Think of this film as the working class, kitchen sink drama version of The Wages of Fear. Stanley Baker plays an ex-con named Tom who's trying to get his life back on the straight and narrow. His prospects are limited so he takes a job driving dump trucks. The job is tough and brutally simple. The drivers truck gravel (called ballast, here) from a pit to a work site and are paid by the load. If they don't haul at least ten loads a day they're fired, and to do that many loads means driving like a maniac. A thug named Red is the semi-official leader of the drivers, and he's promised a reward of a gold cigarette case to anyone who can beat his daily total of runs. This makes each day's work a rally race for the drivers. Over the course of the film Tom and Red butt heads, a romance is ended, a brawl breaks out at a dance, a swindle is uncovered, and the film ends with a truck carrying a major character going over a cliff.

The overall look of Hell Drivers is very raw. The scenery and interiors are bleak, no one dresses well, the drivers take all their meals in a shabby cafe, and even the trucks look like they're one dent away from the junkyard. This is a Britain still recovering from the war and only three years removed from the end of food rationing. The Swinging Sixties, the Beatles, and Carnaby St seem very far away in this universe. Even the scale of the drama is muted. The swindle run by Red and his boss amounts to only a hundred or so pounds a week. And that gold cigarette case? It's worth a measly 200 quid! What the hell could that buy in 1957? Probably one of those small and unreliable British cars like the Morris Marmite or the Vauxhall Skiffle. I think that's what they were called. In sum, this is a film that seems to reflect the convalescent character of a nation recovering from a devastating war.

What makes Hell Drivers of more than passing interest is the cast: Stanley Baker, Patrick McGoohan, Sean Connery, Herbert Lom, Sid James, Gordon Jackson, David McCallum and William Hartnell. There you have the future stars of some of the most iconic film and TV franchises of the 1960s. It seems like a dreadful oversight that Patrick Macnee, Michael Caine and Captain Scarlet weren't also given roles. And the cast certainly does it's bit to distract us from an unambitious plot and scenes of trucks driving "fast" that often look like outtakes from a Keystone Kops film. So here's my suggestion for a thematically linked triple bill: start with The Wages of Fear, then Hell Dirvers, and finish with 1969's The Italian Job for a look at what a brash, confident Britain produced the next time it made a film about reckless driving.
Posted by Cary Watson at 12:23 PM