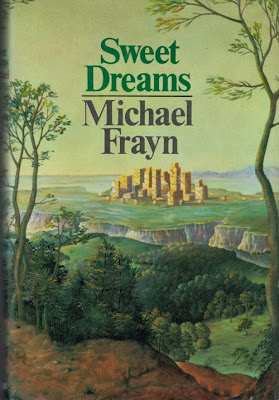 If you've heard of author Michael Frayn it's probably thanks to his plays Copenhagen and Noises Off. Frayn's also a very occasional novelist, and one of his earliest is Sweet Dreams. It should really be as famous as his plays because Sweet Dreams has to rate as a classic fantasy story. You could also make an argument that it's a classic in the field of utopian literature or humorous literature. This slim novel begins with the painfully middle-class Howard Baker sitting behind the wheel of his car in London, waiting for the light to change, his mind wandering from one trivial subject to another. The distracted Howard puts his foot on the gas when the light is still red and the next thing he knows he's driving into the capital city of Heaven.

Yes, this is a fantasy story set in Heaven, which has to earn it marks for audacity alone since I can't think of another author who's taken a crack at a novel with this setting. There are more than a few novels that go to Hell, and of course bits of Milton's Paradise Lost are set in Heaven, but a whole novel? The problems with a Heaven-set novel are fairly obvious: how do you describe ultimate perfection and happiness? Is Heaven a bodiless, Zen-like state of constant bliss? Does it rain puppies and profiteroles? Or, as suggested in Monty Python's The Meaning of Life, is it Christmas every day in Heaven? None of these popular options sound like they could be fleshed out into a novel, and the brilliance of Frayn's novel is that it offers a far more subtle and original idea of Heaven.

And what is the capital city of Heaven like? Think about your favorite city and then add more charm, more character, more local colour, but leave in the tawdry and rough bits that make the best bits stand out all the more. The geography of Heaven is only half the story. Frayn has to give his central character something to be joyful about, and instead of puppies and profiteroles (my personal choice) he gives him...career advancement. This Heaven is one designed to stroke and satisfy the ego of Howard Baker, and that means his life in Heaven, complete with his dearly-departed-from family and friends, goes on much the same as his mortal life, only now his wit, talent, charm and intelligence is remarked upon and rewarded, but not in a shouty, showy way; his accolades come in casual, knowing, heartfelt remarks and in one professional and personal success after another until Howard inevitably takes a job as...but that would be telling.

This is where Sweet Dreams soars as a novel of ideas. Frayn has an acute sense of how the small "L" liberal, middle-class mind works and dreams. Howard Baker's ivy-covered ambitions, tasteful fantasies and simplistic moral view of the world are ruthlessly but delicately eviscerated by Frayn with some of the best comic writing you'll ever come across. And what gives the novel an extra punch is that it's impossible not to read it and blush with recognition at the Howard Baker inside all of us. I think that might be why it's fame is muted. Some readers might admire Frayn's skill and imagination, but at the same time not wish to acknowledge the spiky truths he has on offer. Sweet Dreams is now out of print, so dig through your local used bookstore (they do exist) and start talking it up as the next cult classic that everyone in the know is excited about. That would be a very Howard Baker thing to do.

Well said! I read this back in the late 70s and it left a lasting impression. Definitely an minor masterpiece (overshadowed by his later achievements). Have your read "Headlong"? The humour's a bit broader but still deftly aimed at the same class conceits.

I haven't tried Headlong yet. Hard to believe Sweet Dreams hasn't become a film, at the very least something on the BBC.