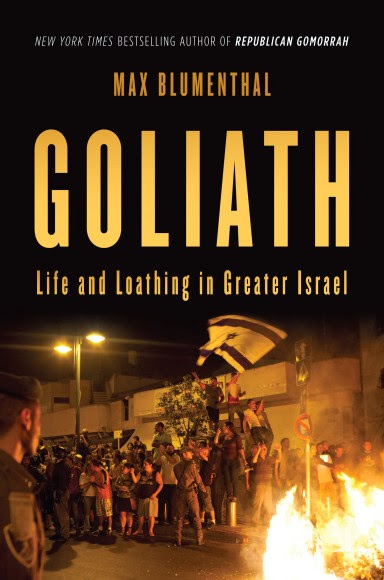 From 2009 to 2013, Max Blumenthal made a series of trips to Israel to witness and report on the reality of political and social life in Israel. The picture that emerges from his examination of Israel explains perfectly why both the Israeli Apartheid protests and the BDS movement (Boycott, Divestment and Sanctions) exist and why they're necessary. Blumenthal's book covers a lot of territory, from the ethnic cleansing that originally created the state of Israel to the political persecution of its Palestinian citizens to the all-pervasive racism that forms the emotional backbone of Israel's de facto system of apartheid.

One of the most shocking things about this book is the fact that so little of what goes on in Israel, the actions that lead to campaigns like BDS, goes unreported in the mainstream Western media. There are two reasons for this. The first is that Israel is proactive in pressuring news organizations like CNN and the New York Times to send over correspondents who are prepared to mute their criticisms of any and all Israeli actions. Here in Canada, CBC Middle East correspondent Neil MacDonald faced a barrage of criticism from Canadian Jewish groups for his "biased" reporting on Israel until he was moved on to being the network's Washington correspondent in 2004. Typically, any reporting that critiques Israel ends up with the reporter being labelled an "anti-Semite" by Israel and pro-Israeli groups. This is why reporting by Jewish writers like Max Blumenthal is so important; it removes the knee-jerk and facile cry of anti-Semitism from the equation, although this hasn't stopped fanciful pro-Israeli commentators from describing Blumenthal and others like him as "self-hating" Jews.

Ingenuous apologists for Israel, as seen in this recent piece in the New York Times, like to argue that the charge of apartheid doesn't stick because formal, bureaucratic devices such as pass laws don't exist in Israel. As Blumenthal shows in painful detail, an ever-enlarging suite of domestic laws and military orders restrict and exclude Palestinians from a wide range of civil rights; and an even more effective means of control and abuse is to simply ignore the law when it applies to Palestinians. Israeli security forces are virtually never disciplined or criticized for abuses against Palestinians, and the same can be said for Jewish attacks (usually settlers) against Palestinians. One could argue that the reason there are no pass laws in Israel is because such a measure would be redundant--the oppressed population is kept down quite nicely without the bother of printing up cards. Anyway, according to a recent poll conducted by the Haaretz newspaper, most Israelis are in favour of an apartheid system, and over half believe apartheid already exists.

It doesn't seem surprising that many Israeli Jews have racist attitudes towards Arabs, but what comes as a shock is how virulent and widespread racism has become. African refugees from the Sudan are subjected to astonishing levels of abuse, and even Mizrahi Jews (those who originated in the Middle East) are looked down upon by Ashkenazi Jews (European Jews), and the ultra-Orthodox seem to have a hate on for most everyone. The most horrific expression of this racism was the publication of a book in 2009 called Torat Ha'Malech. The book was written by two Orthodox rabbis, and it's best described as a guidebook for the killing of non-Jews, the highlight of which is this passage: "There is justification for killing babies if it is clear that they will grow up to harm us, and in such a situation they may be harmed deliberately, and not only during combat with adults." The Israeli government had legal grounds to prosecute the rabbis for writing the book but chose not to.

The nationalist/Zionist racism that has become all-pervasive in Israel isn't only a danger to the country's Palestinian citizens. An increasingly right-wing Knesset is introducing more and more laws which chip away at Israel's tenuous status as a democracy. These laws limit civil liberties for Palestinians, and yet others stifle dissent in any way, shape or form for all Israelis. Israel often likes to declare itself the only democracy in the Middle East, but Blumenthal shows that this is a very debatable claim. The fever swamp that is contemporary Israel has also caused a demographic crisis. While the government is rabidly fearful of the alleged threat of Israeli Arab population growth, it's racist policies, it's pandering to the settler and Orthodox communities, all this has led to the emigration of young, educated, secular Jews who feel Israel is becoming unbearably intolerant and paranoid. Apparently more than a million Israelis now live abroad, and, irony of ironies, one of their preferred destinations is Berlin because of its cosmopolitan, welcoming character.

A legion of pro-Israeli lobbying groups in the West are constantly trying to wrap Israel's crimes and misdemeanors in a kind of moral bubble-wrap, usually by trotting out the excuse that when Israel steps over the line from time to time, it's only because it's defending itself, and, anyway, its neighbours do things that are so much worse. That's a bit like defending a man who beats his wife with the argument that he's not all that bad since the guy next door beats his wife and his kids. The defenders of Israel are actually doing a disservice to the country: the more pressure that's brought to bear on Israel to treat all its citizens as equals, the more likely it will be forced to create a lasting internal peace, which could in turn lower the emotional temperature throughout the Middle East. But even for a country located in the Holy Land, that's probably too much of a miracle to expect.