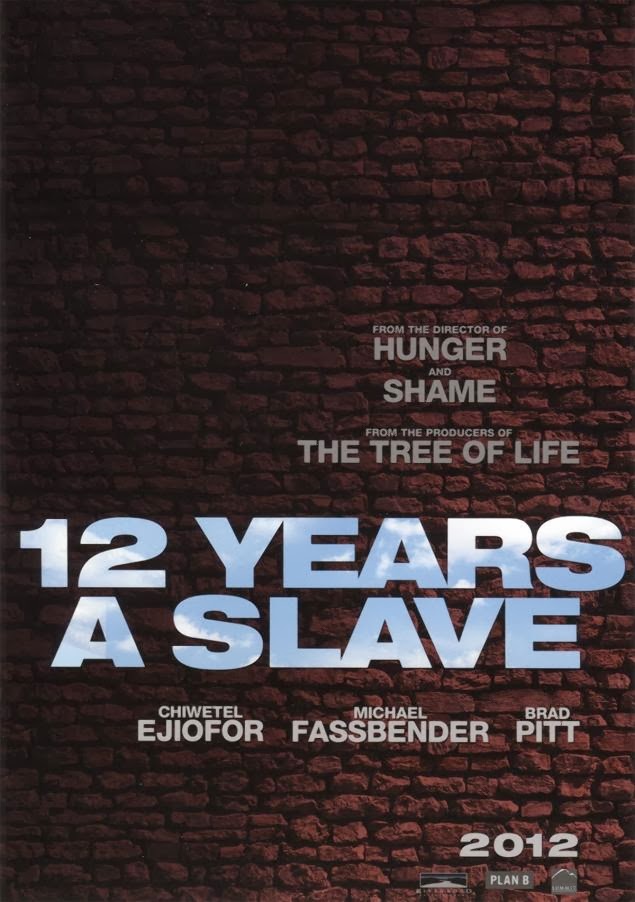 Here's who I really want to see this film: Quentin Tarantino and Steven Spielberg. The pair should be strapped into chairs, have their eyelids locked open a la Clockwork Orange, and be made to watch it over and over again until they begin screaming, "I get it! I get it!" The former will have learned that the history of American slavery is not a suitable subject for an action-comedy wankfest, and the latter will realize that a historical film about a grave and serious subject doesn't need to be buried under a pyroclastic flow of sentimentality, melodrama, bombastic music, and overripe production design.

12 Years a Slave is a harrowing true story about Solomon Northrup, a free black man living in Saratoga, New York, in 1841 who is kidnapped and sold into slavery in the South. Northup's story (the film is based on the book he wrote about his experiences) is filled with the historical tropes of American slavery--beatings, separation of families, sexual exploitation, rape, lynchings, and backbreaking labour. All of these crimes have been shown before in films about the pre-Civil War South, so don't be expecting to see something new on the subject of slavery. What makes this film so exceptional is its artistry.

Director Steve McQueen has made the brilliant decision to let the facts speak for themselves. The horrors of slavery are presented without undue emphasis or sentimentality. One scene early in the film shows a black mother being sold and thereby permanently separated from her two small children. It would have been easy to go the Spielberg route and turn the scene into something overblown, like an aria from a tragic opera, but McQueen lets the scene play out sans editorial comment, and it becomes all the more ghastly because it's underplayed. The director's restraint is even more evident at the end of the film when a single scene encompasses both Northrup's salvation as his white Northern friends find him and secure his release, and his parting from Patsey, a female slave who's the tormented concubine of her demented owner, played brilliantly by Michael Fassbender. Any other director would have dragged this sequence out for maximum emotional value, but McQueen positively whips through the scene and captures that bolt from the blue feeling Northup must have experienced. McQueen clearly made the decision that the facts of Northrup's enslavement needed no dressing up.

This is also a beautifully shot film. There's no sweeping camerawork, no overuse of filters to create gaudy sunrises and sunsets, there's just one beautifully composed shot after another. Like the script and the direction, the cinematography isn't trying to manipulate our emotions or hammer home plot points. And the same can be said for the music by Hans Zimmer, which sometimes has a jarring, almost science fiction-y sound to it that emphasizes Northrup's transition from freedom to slavery. The actors are all top-notch, although Brad Pitt's cameo felt more like a movie star doing a cameo than an actor tackling a role. And yet more credit for McQueen for his choice of Lupita Nyong'o as Patsey. She's beautiful, but most directors would have chosen a more conventionally attractive actor for the role, and they certainly would have played up her looks to explain why she becomes her owner's sex slave. So, needless to say, this is my choice for best film of the year, and I might have to rate it as one of the best films of the last ten years. That it should have to face off against trash like American Hustle and The Wolf of Wall Street for Oscars is a tragedy of another kind.

I appreciate this - gave me more insight into the director's craft, as in "the real art is to conceal the art."

That said for me it's the inevitable moralizing tone that weakens not just this film, but the whole genre... as if the whole slave system boils down to good, kind folk vs nasty racist villains. Moralizing tends to conceal the systemic/economic nature of the conflict.

The film didn't tackle the big picture economic issues, but then the source material is anecdotal rather than analytical. And at least we were spared a Tarantino cameo.