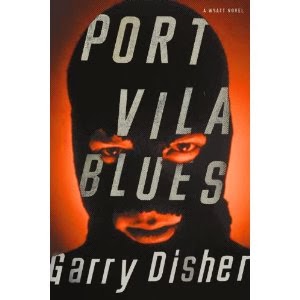 If you've ever read any of the Parker crime novels by Richard Stark (I've a got piece on him here), then there won't be many surprises waiting for you in the Wyatt novels by Garry Disher. The setting is Australia instead of the US, but in every other regard Wyatt is simply Parker's Down Under cousin. Not that there's anything wrong with that. Most genre writers ride on the coattails of the historical greats in their field, and in the case of crime/mystery fiction there are very few contemporary fictional sleuths/heroes who don't carry some of the DNA of Phillip Marlowe, Sherlock Holmes, Miss Marple, and, yes, Parker.

In Port Vila Blues Wyatt, a career thief every bit as ruthless and efficient as Parker, faces off against a bunch of corrupt cops after his latest burglary unearths a Tiffany brooch that leads to a crooked judge who's masterminding his own team of burglars. There's double-crosses, random acts of violence, and Wyatt has to get himself out of some very tight situations. The writing is good, but if you've read anything by Stark you're left wishing that he had not taken a twenty-five-year hiatus in writing Parker novels.

What's interesting about Parker, Wyatt and Lee Child's Jack Reacher (yet another of Parker's literary cousins) is the appeal these sociopaths have for readers. Yes, they are sociopaths. What distinguishes the firm of Parker, Wyatt & Reacher from other crime fiction heroes and anti-heroes is their utter cold-bloodedness, their disconnect from normal life and emotions, and their casual use of lethal and non-lethal violence. In the real world, people like this are behind bars for lengthy stretches or on death row, and society is happy that that's where they are. In fiction, however, a significant number of readers take a vicarious thrill in the remorseless actions of PW & R. It's rather disturbing and revealing that a great many people have a secret fantasy that involves either being a stone cold killer, or wishing that there was flinty-eyed avenging angel out there (take a bow, Jack Reacher) willing and eager to kill without mercy or hesitation in order to return the social order to its rightful balance. What separates PW & R from more traditional heroes is their thorough disconnect with normal human relationships and behavior. PW & R don't have hobbies, they have no permanent relationships, no living relatives, they have alliances rather than friendships, most quotidian human pleasures are a mystery to them, and the opposite sex only exists for casual sex. James Bond may have been the first hero of this type (here's my piece on Bond), but at least his sociopathy was moderated by rampant sensualism; PW & R are positively monk-like in their tastes--Reacher, for example, makes a fetish of only drinking black coffee.

I'll admit I'm a fan of PW & R, but it's something of a guilty pleasure. Like a lot of other readers, I guess I have a secret, perverse desire for an agent of chaos and violence to be at large in the world to disrupt my safe, predictable middle-class existence. I know that it would be best and safest to live in a Miss Marple world, but every once in a while I'd like to see PW & R blow through town and knock over a bank, gun down a crime lord, and break the arms of some thugs. But please, no casual sex with Miss Marple. Some worlds should never collide.