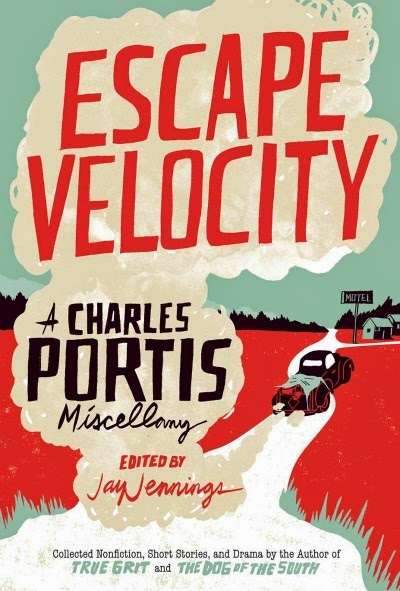 Charles Portis can inspire boredom and loathing in people who've never read his books. This is because he's one of those writers whose works have created a legion of devotees who carry that True Believer gleam in their eyes, much like Jehovah's Witnesses or Breaking Bad fans. Poritis-lovers, like members of any cult, are terrible and unrelenting proselytizers for the Bard of Little Rock, Arkansas, and for the average reader there is nothing more tedious and annoying than someone who relentlessly tells them that they must read this author because he's absolutely the best writer no one's ever heard of and if they don't read him they will remain in the outer darkness. Yes, Portis is one of those writers, but he has the talent to backup the claims to greatness made on his behalf. I must admit that I'm a member of the Portis fan club and have the poma to prove it. You see what I did just there? I made a knowing reference to Portis' Masters of Atlatntis (my review), and if you get on the bandwagon with me, you'll understand what a "poma" is.

Escape Velocity is a sampler of Portis' short stories, travel pieces, journalism, and a three-act play called Delray's New Moon. If you've never read anything by Portis it's probably best not to start with this volume, but for devotees such as myself, this is a very welcome addition to the all-too-skimpy Portis canon. One of the highlights of this collection is Portis' news reporting on the civil rights movement in Mississippi and Alabama. His journalism is a beautiful balance of the anecdotal and factual, and, as Jay Jennings points out in the introduction, it's surprising his writing on this subject hasn't found a wider audience.

Most Portis fans are going to pick up this book in the hope of finding more examples of Portis' unique comic voice. They won't be disappointed. The star attraction in this regard is the play, which has evidently only been performed once but surely deserves wider exposure. It's not much in terms of plot, but it's a kind of seminar on the elements that make Portis such a gifted humorist. There's the obsession with the care and maintenance of cars, his ear for subtly absurdist dialogue, and what's probably his strongest comic skill, creating characters who attach a ridiculous degree of importance to the most minor of accomplishments or skills. Here's one of the play's characters talking proudly about how her parents got together:

"At that time it was unheard of for a lab chief to carry on with his rodent control officer, but Dad didn't care. He snaps his fingers at all those silly social conventions. And besides, what else could he do? Mom had fairly bowled him over with her brisk air of command and her firm hand with the rats."

It's probably the defining characteristic of Portis' comic characters that they are endlessly impressed by their own unexceptional lives and achievements. Out of the whole cloth of quotidian life they construct small-scale, yet potent, beliefs and fantasies that give them fuel for their anger, happiness, pride, and the energy that keeps them moving in their eccentric orbits. Portis doesn't mock these people, at least not in a sneering or patronizing way, instead he offers them to us as the human version of fascinating "found" objects; characters who are odd and amusing in a peculiarly American way. Portis even manages to bring this quality to his travel articles, especially a piece on motels called Motel Life, Lower Reaches that should probably find a home in every anthology of American humour for the next century or so.

Not every example of Portis' work is a gem. The short stories left me cold, probably because the humorous ones feel forced, as though Portis is trying to be conventionally funny. Aside from that minor problem, this book is further proof that Portis' fame should be far greater. It's not just that he makes us laugh, Portis is also a deceptively brilliant prose writer. Read through this collection and you begin to realize that he has an uncanny ability to never put a foot wrong; there's never a word out of place, a sentence or thought too long, or an awkward phrase or description. Portis' relaxed, plain prose is actually put together with the same level of precision and attention to detail that, to use a Portis-friendly automotive analogy, goes into the building of a Ferrari, although I think he'd probably be more comfortable with something American. So if there's a Ferrari of pickups, then that's Portis.
Posted by Cary Watson at 12:27 PM