Book Review: The Middle of Nowhere (2014) by Geraldine McCaughrean 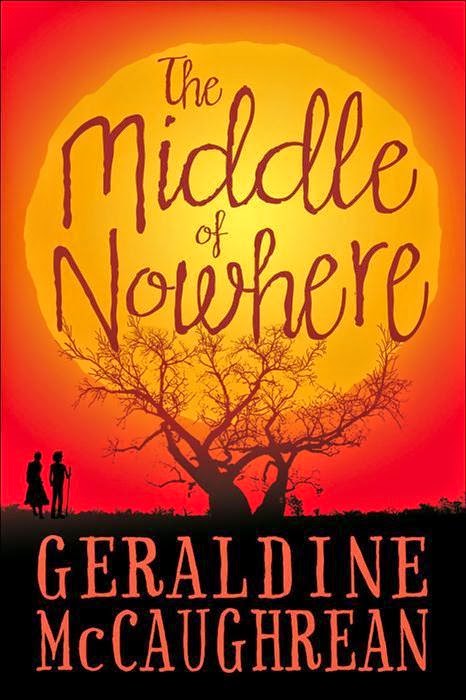 There's simply no arguing that Geraldine McCaughrean likes to see her characters suffer. It's par for the course that the lead character in a YA novel should lose one or both parents, or become separated from their family, or even grow up without any kind of family. McCaughrean, however, likes to go the extra mile and put her characters through sheer hell. In The Death Defying Pepper Roux the title character runs away from home because he's been brainwashed (by his family!) into believing God wants to kill him on his fourteenth birthday. In      Not the End of the World, a retelling of the Noah myth, one of Noah's daughters not only sees the world destroyed, she also has to witness life on the ark turn into bloody chaos and her father and brother become maniacs. And in Lovesong, one of a handful of adult titles she's written, Life and Fate take turns kicking the main character in the teeth. So where most YA authors will leaven their fiction with just a dash of tragedy, G-Mac (my own abbreviation) likes to go the full Sophocles and plunge her characters into situations that would make the gods weep. This is part of what makes McCaughrean's writing so memorable, and turns many of her novels from Young Adult fiction into literary fiction that happens to feature young adults.

McCaughrean's newest novel shows that she hasn't lost her taste for harrowing the souls of her main characters. The story opens in 1894 with a young girl named Comity Pinney sitting by the freshly dug grave of her mother. The setting is a telegraph relay station in the hottest, bleakest, most outback part of Australia's Outback. Comity's mother was killed by a bite from a tiger snake; a random, pointless death that has sent Comity's father, Herbert, into a deep depression. Herbert's in charge of the relay station, and a few weeks after his wife's death the telegraph company sends him an assistant named Quartz Hogg. Hogg is cocky, a blowhard, a weasel, and evil right the way through. We're not talking merely rotten or nasty, Hogg is a petty demon who seems to have been sent to turn a hellish place into Hell. He senses Herbert's weakness and exploits the power vacuum he's stepped into to the max. Things go from bad to worse for Comity and her father, and at times I was expecting one or both of them would end up stark raving mad or dead. As is usual in McCaughrean's novels things turn out alright in the end, but the journey to get there is tortured, to say the least, and there some shocking and fatal detours along the way.

McCaughrean's prose is what separates her from all other YA writers and most writers in general. Her ability to bring the natural world to life, or to bring poetry and depth to her descriptions of emotions and feelings is constantly impressive, and this novel maintains her high standards. In the pantheon of McCaughrean's work this isn't one of her very best, but her second-tier works are still worth celebrating.
Posted by Cary Watson at 11:34 AM