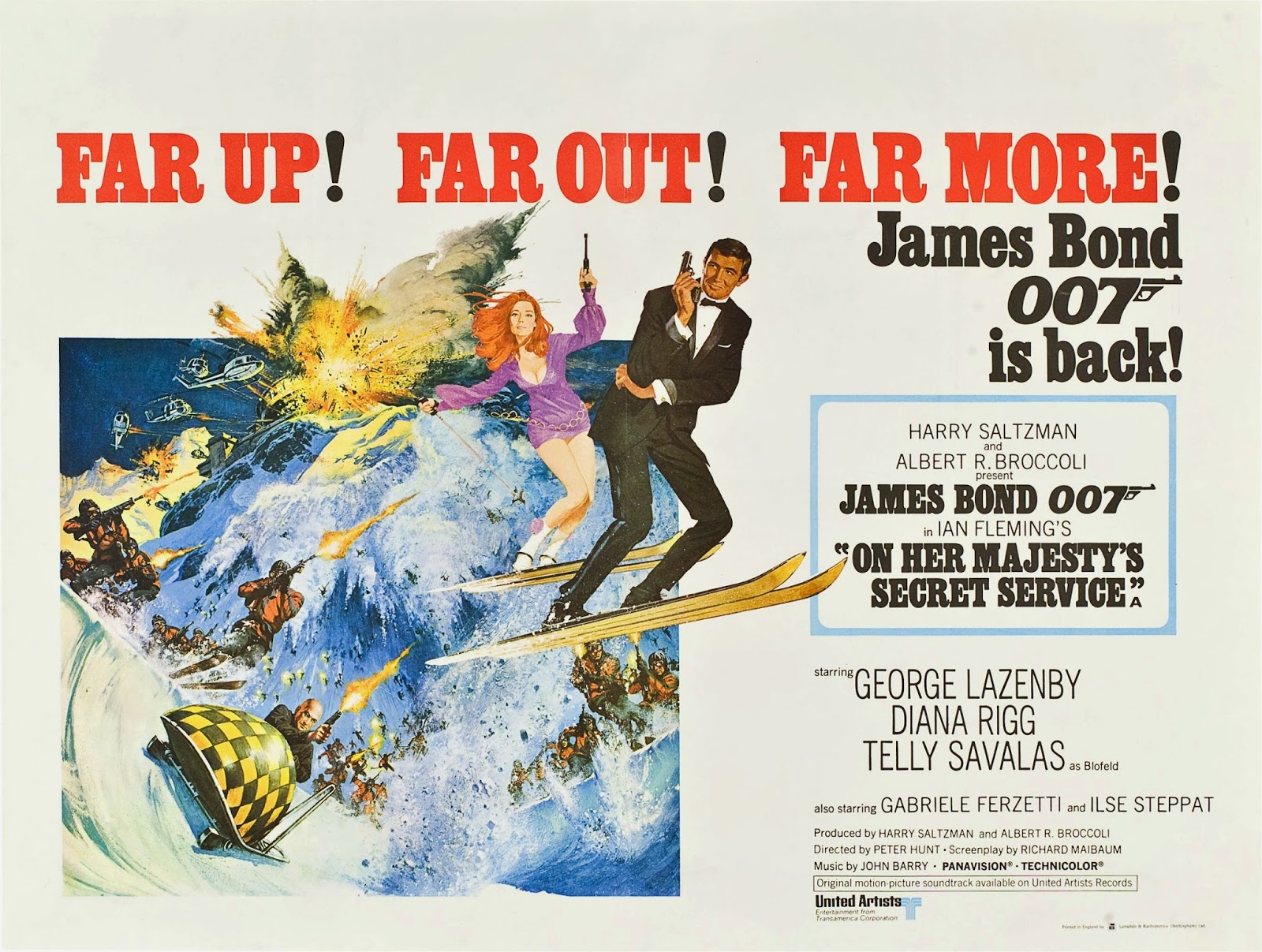 I hadn't watched this Bond film since it turned up on TV sometime in the late 1970s, and I remember it as being the worst Bond film ever and that George Lazenby richly deserved the meagre B-movie career (kung fu films, Emmanuelle sequels) he moved onto after his one shot at playing 007. Over the last year or so, however, I've been noticing that various critics and bloggers have been saying that OHMSS isn't really all that bad; in fact, some of them go so far as to say it's one of the best of the 007 films. And then I came across this recent blogpost by director Steven Soderbergh who unflinchingly describes it as the best Bond film, bar none. That did it. I rushed right out (metaphorically speaking) and downloaded OHMSS. Holy crap, Miss Moneypenny! This isn't just a bad Bond film, it's bad filmmaking by any definition, and I can only assume that its defenders are being willfully contrary.

Let's begin the dissection with Lazenby. The pro-OHMSS forces can talk all they want about his physicality, but the fact remains that he can't act, period. Another actor had to dub vast chunks of his dialogue, for God's sake! Lazenby is simply a stiff, awkward (watch him try, and fail, to walk across a room convincingly), wooden black hole at the centre of the film. It's actually a wonder that all his lines didn't end up being dubbed because his readings of even the simplest bits of dialogue are gratingly tone deaf. The legendary Bond quips escape from his lips and simply fall to the floor with a quiet thud, gasping for life. Considering that Lazenby was a male model and had never acted, an infomercial-quality thesping job was pretty much inevitable.

Soderbergh hedges his bets in his praise of OHMSS by saying that "cinematically" it's the best Bond film. I don't think he and I watched the same film. With one exception the editing is shockingly clumsy, creating glaring continuity errors and turning the fight sequences into something resembling the saloon brawls from bad westerns. And many of the action scenes are marred by the use of fast motion, which is used to speed up the action to the detriment of verisimilitude; it's really a kind of cheat, a means to liven up an otherwise flat action scene. On the plus side, the location photography is often spectacular, particularly the shots of the Alps. The final assault on Blofeld's mountaintop H.Q. is actually an excellent combination of action choreography, editing, and cinematography, but this 5-7 minute section hardly makes up for all the wonky filmmaking that surrounds it. I have a feeling that it's this short sequence that moved Soderbergh to call OHMSS "cinematically" the best of the Bonds.

I think even Soderbergh would have to admit that OHMSS's script is a clunker. There isn't one memorable line, and even Diana Rigg (playing Tracy Draco) can't bring things to life until she gets to show off her RADA training by reciting some lines of poetry by James Elroy Flecker, a relatively obscure Victorian poet. I suspect Rigg begged for this scene so she could briefly escape from the tedium of scriptwriter Richard Maibaum's words. Bond films are always sexist, but this one adds an extra level of creepiness with Draco, the father of Rigg's character, urging Bond have sex with her often so that she'll fall in love with him. Thanks, dad, you pervy bastard! Oh, and Tracy gets slapped upside her head by both Bond and her father. Charming. The script is so bland and witless I doubt even Connery could have rescued it, and I'm certain he would never have agreed to be part of the syrupy romantic montage that's used to establish Bond and Tracy's love affair.

So if you haven't seen OHMSS yet, save yourself from the pain and watch the spoof Casino Royale (1967) instead. It's not a lot better, but even Woody Allen makes a better James Bond than Lazenby.
Posted by Cary Watson at 8:06 PM