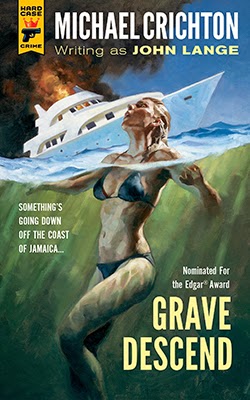 I came across this crime thriller thanks to Peter Rozovsky over at his Detectives Beyond Borders blog, where he astutely points out that its most notable feature, aside from being one of Michael Crichton's early works before he became Michael Crichton Inc., is its economical writing style. Crichton/Lange is, indeed, thrifty with the descriptive prose. Landscapes and locations are described in the most perfunctory terms, and the characters are identified by their skin colour, general build, level of attractiveness, and not much else. The dialogue is equally terse, with no one being allowed to prattle on for more than three or four sentences in a row. The villain is the only exception to this rule, but that's OK because bad guys are obliged to ramble on in their orotund fashion in order to fill us in on their dastardly schemes. The plot is king here, and Crichton keeps things hopping along with great energy as his hero, commercial diver James McGregor, is hired to do a salvage job on a yacht that has sunk under mysterious circumstances just off the coast of Jamaica. There are gun fights, tense moments underwater, scary encounters with sharks and crocodiles, plots within plots, and a variety of femme fatales, each more attractive than the next.

Grave Descend is not trying to be more than a pulp thriller, but it's certainly one of the better ones of its kind from that era, and the worst thing you can say about it is that it's an inferior Travis McGee adventure.  Crichton would actually turn into a far worse writer later in his career, when his novels Congo and Timeline began to resemble Popular Science articles leavened with a bit of violence and intrigue. It's easy to get sniffy about writers like Crichton, but I look at them (and their writing style) as inheritors of the oral storytelling tradition. Once upon a time, as they say, stories only came in spoken form from the local bard or storyteller. Read any collection of folk tales or fairy tales from Grimm's onwards and you'll notice that the stories are filled with a lot of descriptive boilerplate: heroes are "fair and handsome," maidens have "skin white as milk," mountains are so high they "touch the sky," and forests are always "dark and deep." Story after story uses the same descriptors as a kind of shorthand to quickly set the scene for the audience so that the main attraction, the story, isn't slowed down by distracting detail. A storyteller would probably have risked having a drinking vessel chucked at his head if he'd tried to flesh his tale out by saying that the hero's quest was actually due to structural changes in the goatherd industry, or that forests that are dark and deep are actually quite fascinating when you study the symbiotic relation...Ouch! You get the idea. Crichton uses similar devices. Here are some samples from just the first two pages of the novel:

"He had cut through the tiny mountain villages, the native huts perched precariously beside the road; then down through lush valleys of tropical vegetation."

"In the distance, he could see blue water, with waves breaking across the inner reefs, and hotels lining the beachfront."

With this kind of punchy, pulpy writing, details are skimped and the big picture is drawn in broad strokes, no time to wax poetic on what colours and types of flowers are in those beds, the size and variety of the hotels, what kinds of lives are lived in those huts, and, of course, we're left to ponder what might a carelessly watered palm look like. But those are worries for another kind of novel. With pulp novels the reader is expected to fill in the blanks with his own imagination once he's been given the right cues. A description like "lush valleys of tropical vegetation" is as cliche as it gets, but there's no one who can't instantly summon up a mental picture of such a landscape. Just for comparison's sake, here's what a literary writer, Yasmine Gooneratne, does with a description of a tropical landscape in The Sweet and Simple Kind:

"When the wreaths of mist lift, leaving the grass wet with dew, mornings on the estate clink and ring with birdsong, sounding very much as if a crowd of children were jingling thin silver coins in their pockets, considering the possibilities."

That's startlingly beautiful writing, but it gets us nowhere in terms of story. An essentially oral storyteller like Crichton is trying to hold the attention of a broad and varied audience by crafting modern-day folk tales that make the reader constantly, and anxiously, ask, "WTF's going to happen next?" This is a hell of a long way from literary writing, and it's often not even good writing, but I think it positions Crichton and his peers in the Guild of Pulp Writers as direct descendants of the men and women who sat by campfires and hearths weaving magical stories built out of stock phrases and familiar characters, and a whole lot of imagination and energy.

So Crichton could have been a very good pulp storyteller, had he decided that was what he wanted to do. There is something scintillating about cut-right-to-the-chase storytelling of the kind in Grave Descend. And you're right about the villain, too. He's a startling late-Bond-like intrusion into this stripped-down pulp story.