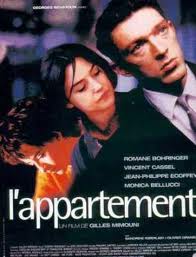 The problem with watching Alfred Hitchcock's films is that they leave you wanting to see another and another, to savour his unique and playful blend of romance, tension and intrigue. Unfortunately Hitch has gone to the Bates Motel in the sky, and no one has really proven to be his equal.

L'appartement is the closest to being a "new" Hitchcock film that I've ever come across. The director, Gilles Mimouni, makes the connection to Hitchcock clear from the beginning with a lush, romantic soundtrack (courtesy of Peter Chase) that immediately recalls Vertigo. Also like Hitch, Mimouni uses sweeping camerawork and a rich colour palette to heighten the eccentric nature of his story.

Ah, the plot. Well, in the interest of not revealing too much I'll just say that Max, played by Vincent Cassel, thinks he catches a glimpse of Lisa (Monica Bellucci), the love of his life who seemingly vanished two years previously. Max has just become engaged and is due to fly to Tokyo for an important business trip, but he decides to put everything on hold to track down Lisa. Naturally, not everything is as it appears and the story, filled with flashbacks and unexpected plot twists, becomes a romantic mystery and a thriller. 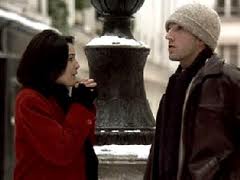 Looked at as a whole the plot verges on the nonsensical, but then so do many of Hitchcock's films. Half the fun and purpose of Hitchcock's films is to see what happens to ordinary people when they're caught in an extraordinary series of events. And where Hitchcock liked to play with the language of film, Mimouni focuses on creating a series of overripe, romantic interiors that are stars on their own right. In fact, you could almost call this a film about apartments, as each of the several featured in the story are given a distinct and arresting look. And even Paris, which doesn't need much help to look mysterious and romantic, is made to look lusher and more delectable than the real thing.

During the final section of the film, as the loose ends are being tied up and various mysteries are revealed and solved, you'll be amazed at the cunning of the plot. You'll also want to immediately re-watch it to understand how it all fits together. The only real flaw in the film is that Max is forced to make some unlikely life choices in order to keep the plot moving along, but that's a minor quibble. Call this one Hitchcock's last great film.

Film Review: Malena
Posted by Cary Watson at 2:32 AM