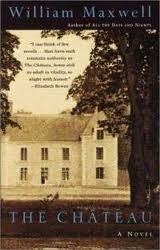 There are literary novels, and then there are Literary Novels. The Chateau is very definitely the latter. It follows, very consciously, the literary path trod by Henry James with his portraits of middle-class Americans encountering the charms and pitfalls of Europe. In this case, we follow Harold and Barbara Rhodes of New York as they visit France in 1948. In James' novels The American and The Portrait of a Lady, the American characters travel to Europe and experience the expected culture clashes, but also become involved in dramatic plots revolving around love and marriage.

Maxwell does not make the Rhodes' jump through any dramatic hoops, choosing instead to show them coping with the difficulties of new social relationships. The Rhodes' arrive in a France that is still just recovering from the war. They begin their four month trip with an extended stay at a small chateau in the Loire Valley. The chateau, owned by Mlle. Vienot, is run as a guesthouse, and Harold and Barbara soon find themselves in a series of new friendships and awkward social entanglements with Vienot's guests and relatives. The action later moves to the south of France, and then Paris, but the Rhodes' remain involved with the people they first met at the chateau.

Maxwell takes an acute look at the social anxieties of the Rhodes, as well as their emotional and psychological reactions to France, Paris, and the pleasures and pains of travel itself. On this level the novel works quite well as a unique insight into the way travel (as opposed to tourism) can be both psychologically upsetting and liberating. The Rhodes' have a short, but blissful, sojourn on the Riviera and Maxwell captures the intensity of the experience through this remark of Harold's at the end of the stay: "I feel the way I ought to have felt at seventeen and didn't."

Where Maxwell is less successful is with his main characters. For the purposes of this kind of novel Harold and Barbara have to be somewhat innocent and naive, which is fine, but they're also rather flat and colourless. This is a bit surprising given that the French characters, even some of the minor ones, come across as complex and fully-rounded. The Rhodes', by comparison, have characteristics but no character. They have, for example, quite an interest in opera and theatre, and yet nothing about them seems artistic, and nothing we learn about their backgrounds make it seem like they'd be culture vultures. At times it feels as though Maxwell made them opera and theatre buffs just to give the Rhodes somewhere to go in the evenings.

Where Maxwell differs most from James is on the prose front. James was famous for a baroque, nuanced style that people either found brilliant or maddening. Maxwell has a leaner, more direct style, and leavens his story with a lot more humour than James ever did. And in the last section of the novel Maxwell even takes a stab at deconstructing his own novel, with a reader (we assume) interrogating the author as to what happened to the various characters after the "end" of the story.

On the whole The Chateau works best as a look at the tensions and rewards of travel. Maxwell's prose is a pleasure, but it also has to be said that there are some self-consciously literary asides and flourishes that are quite distracting. Maxwell was the fiction editor at The New Yorker from the 1940s to the '70s, and at times I got the feeling that this novel was as much about impressing his peers as it was about Harold and Barbara Rhodes.
Posted by Cary Watson at 2:26 AM

Am just reading "The Chateau" as an e-book (my first one!), because "So Long, See You Tomorrow", also by Maxwell, made such an impression on me recently. Wanted to know what other readers thought about Maxwell, in general, and about "The Chateau", in particular.
I really appreciate your considered and insightful posting. Makes the reading of "The Chateau" even more enjoyable. Thank you!

Thanks, Diana. Glad you liked it.