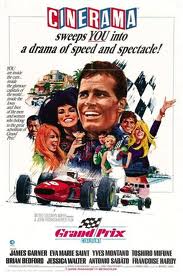 One of the big complaints leveled against films like Transformers and Cowboys & Aliens is that so much intelligence and artistry goes into programming the computers that spit out the CG images, none appears to be left for the script. The result, many critics say, is that we're left with compelling special effects sequences attached to a lot of bad dialogue and clunky plots. Not like in the good old days when Hollywood cared about plot, character and dialogue, right? Uh, no.

In the pre-Star Wars days the word studios and filmmakers used instead of CGI or special effects was "spectacle." And spectacle meant you were going to get hordes of extras, exotic locales, and big, long, complicated action sequences. Lawrence of Arabia is probably the definitive spectacle film in the same way that Avatar is the ultimate (for now) special effects film. Grand Prix was one of the big spectacle films of its time.

I have only previously seen Grand Prix on TV, and that was in b&w and over twenty years ago. After just seeing it on DVD on a big screen I'd have to say it counts as the Transformers of its day. The spectacle part is truly spectacular. The story follows four different drivers over the course of one Formula One season, and along the way John Frankenheimer, the director, stages four races that are definitive in their excellence. If you set out today to film a Formula One race, even using all the latest technology, it's impossible to imagine doing a better job than Frankenheimer did. The pacing, the camerawork, the editing, it's all perfect.

But now we come to the other half of the equation: that part of the script that's not devoted to vroom-vroom. It's godawful. Away from the track our drivers, played by James Garner, Yves Montand, Brian Bedford, and Antonio Sabato, find themselves in romantic entanglements with three women, played by Jessica Walter, Eva Marie Saint and Francoise Hardy. Note the disparity in numbers. This is because Garner and Bedford find themselves fighting for the affections of Jessica Walter. Each romantic sub-plot is worse than the next, and they go on and on and on. Montand and Eva Marie Saint have the dullest extramarital affair in history, and Sabato and Hardy, neither of whom appear to speak English, have a romance that feels like a role-playing exercise in an ESL class.

Not only is the romantic stuff rancid, it's not even filmed with any technical competence. Some of the interior sequences are harshly lit, and camera shadows are plainly visible in more than a few shots. I strongly suspect that Frankenheimer, exhausted or otherwise occupied by planning the race sequences, handed off these scenes to a second unit director. At least I'd like to believe that, because Frankenheimer was normally just as good at directing non-action sequences. So next time you hear someone say that CGI is killing storytelling, bear in mind that Hollywood has always sacrificed story for spectacle. Most of the toga epics of the 1950s and early '60s (think Cleopatra, Ben-Hur) were just as empty-headed and spectacular as The Green Lantern or Battle Los Angeles.

I don't believe it either: I've written a mystery novel! Just click on the above image and you'll be whisked away to a lovely place where you can order my book for yourself and your numerous friends and relations. It's an impulse purchase you won't regret. You can also order it at Amazon.com. If you do book reviews on your own website contact me to see about getting a review copy.
Follow @JettisonCocoon