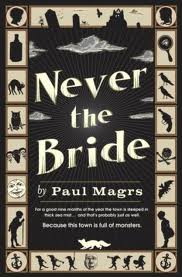 Here's the deal: if you're going to have a ridiculous, fantastical premise for your novel, you'd better follow through with some highly imaginative storytelling or a lot of humour to let us know that you appreciate how ludicrous your basic concept is.  Paul Magrs does neither. His heroine is Brenda, the original Bride of Frankenstein, who now operates a B & B in Whitby, England, where, with the help of her friend Effie, she battles supernatural baddies. Apparently, Whitby is a gateway to Hell so all kinds of shifty, dangerous characters reside in the neighborhood.

Magrs has a fun premise to build a comic, Terry Pratchett-esque story around, but he settles instead for a bland, cozy mystery with a dollop of horror. What's worse is that he structures his novel in a clumsy, episodic fashion. This gives the book the feeling of being a first-draft treatment for a TV series rather than a properly planned novel. Magrs can write, it's just that his plotting doesn't come close to matching his prose. Magrs has written for Dr. Who in the past, and that's what this novel comes across as: a Dr. Who story minus the doctor and minus the imagination.
Posted by Cary Watson at 12:46 AM