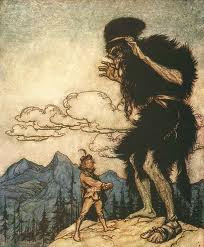 Yes, this one takes its style and structure from the Blair Witch playbook, but the trolls make all the difference. The filmmakers haven't tried to make their trolls look plausible or somehow alien; these trolls look like something from an illustration in a kids' book of fairy tales: they have multiple heads, cartoonishly bulbous noses, a galumphing walk, and, true to legend, they like to lurk under bridges. These trolls are also very, very big, and the director, Andre Ovredal, deserves credit for making them more menacing than that critter in Cloverfield, despite the fact that trolls are, well, silly.

The plot, such as it is, has some eager college kids deciding to make a documentary about Hans, a man they suspect is a bear poacher. This early part of the story isn't setup very well, but it serves to get us to the trolls. Hans, it turns out, is actually a trollhunter employed by the Norwegian government to keep trolls in check. The government wants to keep trolls hush-hush, but Hans is tired of the secrecy and lets himself be filmed. What follows is something of a nature documentary as Hans talks matter-of-factly about the natural history of trolls. We also see Hans at his work, which consists of tracking down rogue trolls and killing them with light. Trolls, as all Norwegian kids know, die if exposed to light, or, in this case, a battery of lights mounted on a truck.

The climax of the film takes place on a snowy plateau where Hans faces off against a 200-foot tall mountain troll. It's at this point, if not before, that you realize this film looks as good or better than most Hollywood creature features, and that's with a budget of only $3m. All is not perfect with Trollhunter: the college kids are superfluous, and the film cries out for a bit more humour (these are effing trolls!), but it's certainly a lot of fun. In fact, I'd be willing to watch a Trollhunter 2 as long as they keep the budget low.