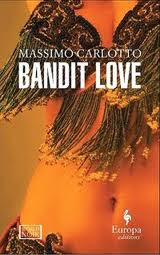 I'm a big fan of Massimo Carlotto, but Bandit Love is a mess. Carlotto is one of the better Italian crime writers, and knows more about the subject of crime than most writers thanks to having once been thrown in prison for a murder he didn't commit. His autobiographical novel about his ordeal, The Fugitive, is sensational, and his crime novels The Goodbye Kiss and The Master of Knots are lean, tough and gritty.

The problem with Bandit Love is that it's issue-driven. The issue is the corruption of Italian society from top to bottom and from side to side. In the Italy of Bandit Love everyone takes bribes, pays bribes, use drugs, sells drugs, hires illegal immigrants, or is an illegal immigrant. And while Carlotto obviously has a lot to say on this subject, he doesn't have a plot to carry his editorializing along for the ride. The story has "Alligator" (Carlotto's private eye character) helping a friend track down his kidnapped girlfriend. That story is wrapped up halfway through the novel and then Carlotto switches gears and we follow Alligator and his friends as they take revenge against the Serbian mafia boss responsible for kidnapping the woman. Both plots are lazily developed and generate zero tension.

Another sign that Carlotto really didn't have a coherent plan for this novel is that he has Alligator nattering on about jazz and blues, mentioning his favourite songs, and so on. Any time a crime writer has his main character making frequent commentaries about music, films, food or local history, you know the author's treading water because his plot is too thin. If Silvio "bunga-bunga" Berlusconi is any indication I can well believe that Italy is as rotten as it's depicted in Bandit Love, but whining and bitching about it isn't a good basis for a novel. Carlotto should take a look at Dominique Manotti, a French crime writer who effortlessly mixes political commentary with complex, fast-paced, violent plots.

Below is the trailer for Arrivederci Amore, Ciao, the film version of The Goodbye Kiss. The film's excellent, and even though the trailer isn't in English, it is available on DVD with English sub-titles.