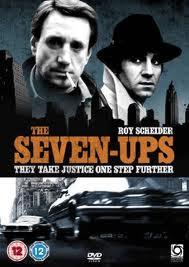 Philip D'Antoni isn't a name you hear mentioned often when the history of modern cinema is discussed, but he certainly deserves some credit for two notable contributions to film history. The first is the car chase. D'Antoni was the producer of Bullitt, The French Connection, and The Seven-Ups. Now there were certainly car chases before Bullitt, but they were usually done for comic effect as in It's a Mad, Mad, Mad, Mad World, or they were clumsily filmed scenes (lots of rear projection shots) of squad cars chasing bank robbers. In Bullitt and The French Connection the car chase became an action centrepiece, the equivalent of the cavalry charge in westerns and historical epics. D'Antoni's "modern" car chases looked and sounded real, and created a new kind of cinematic excitement. After The French Connection virtually no action film was complete unlesss it included one or more elaborately staged car chases.

D'Antoni's other addition to film history is the creation of a sub-genre I'd call cop noir. Cop noir begins with The French Connection. If film noir was all about doomed lovers, laconic private detectives, and moody cinematography, cop noir was about documenting the decline and fall of American cities and the institutions that make them function as seen through cop eyes. Cop noir looks raw, sounds raw, and shows big American cities torn apart by street crime, organized crime, drug addiction, poverty, and corruption. Hard on the heels of The French Connection came Dirty Harry, Across 110th Street, Busting, Serpico, The Taking of Pelham 123, Badge 373, and a score of similar films. Bullitt isn't cop noir if only because Steve McQueen looks great, acts cool, mostly keeps his temper, and has a supermodel girlfriend before there were supermodels. Compare and contrast with Gene Hackman in The French Connection and you'll see what I mean.

And that brings us to The Seven-Ups. The story has a pre-Jaws Roy Scheider leading a small team of N.Y.C. cops who go after villains wanted for crimes that earn sentences of seven years and up. Why seven years? Because it makes for a punny movie title. The film's title is a dud, but the film isn't. The Seven-Ups is essentially a sequel to Connection in everything but name. It has the same gritty look, Don Ellis scored both films, and it features possibly the best car chase of the three films D'Antoni produced.

The plot has Scheider's team investigating why some of the city's crime bosses are being kidnapped. It turns out Scheider's main snitch, played by Tony Lo Bianco, is using information he gets from an unwitting Scheider to target wealthy criminals for kidnapping and ransom. Things are further complicated by the fact that snitch and cop are childhood friends.Things don't end well for one of them. The story is original and engaging, and might have been even better if D'Antoni hadn't decided to direct this film himself. He had no experience at directing and it shows on occasion. A couple of sequences, notably a scene in a car wash, are clumsily handled and feature a variety of glaring continuity errors.

D'Antoni does redeem himself with the action sequences, which are quick, dirty and efficient, and the car chase, which is certainly as good as the one in Connection as well as being longer. D'Antoni the director also does a nice job with the actors, choosing an all-ugly cast of New York actors who bring a lot of verisimilitude to the film. And New York looks like, well, the New York you don't see in Woody Allen movies. This is Ratso Rizzo's N.Y.C.

If you like to remember New York as being mad, bad and dangerous to visit, check out The Seven-Ups. Spoiler alert: the trailer below shows way too much of the film's highlights.

I haven't heard of this so thank you for sharing it. I love Roy Scheider and am definitely intrigued by this. Besides I love a great car chase. :)

Thanks, Melissa. It's well worth hunting this one down, and, as you say, Roy is always watchable.