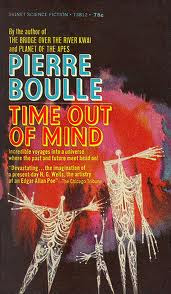 You may not be familiar with writer Pierre Boulle, but you've almost certainly seen either The Planet of the Apes or The Bridge On the River Kwai, both of which are based on novels he wrote. Clearly, this is a guy who can come up with some clever story ideas.

Time Out of Mind is a collection of twelve short stories, most of them with a sci-fi angle. As a writer, Boulle is definitely more of a concept guy than a wordsmith. All his stories have a kind of binary structure in which two opposing ideas or entities are in perfectly synchronized conflict. This sometimes produces good results, but on the whole Boulle's stories aren't in the same league as, say, Ray Bradbury's.

One of the best stories is The Enigmatic Saint, about an overpopulated leper colony in medieval France that's visited by a man who appears to be a saint. The description of the colony is appropriately gruesome, and Boulle does a nice job of showing the colony mirroring the brutal class structure of the outside world. The final reveal is a bit shouty, but it's still good. The Miracle, which is about a priest who, to his own amazement, performs a miracle, has nice twist to it, and The Man Who Picked Up Pins is an amusing and ironic diatribe against one particular folktale.
Posted by Cary Watson at 3:05 PM

Email ThisBlogThis!Share to TwitterShare to FacebookShare to Pinterest
Labels: Pierre Boulle, Ray Bradbury, The Bridge On the River Kwai, The Planet of the Apes, Time Out of Mind