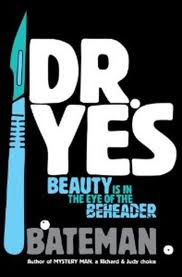 Colin Bateman can do better than this. I've read two of his Dan Starkey mysteries, Belfast Confidential and The Horse With My Name, and they work quite well as hard-edged mysteries with a side order of comedy. In Dr. Yes the emphasis is on the comedy, and there's very little edge, hard or otherwise. In fact, this novel could almost qualify as a cosy mystery, and that's not something a lad-lit writer like Bateman would want. The Starkey books are definitely lad-lit, with lots of boozing, casual violence, sexism, and a hero who's lippy and self-centred. Those can be good things.

Dr. Yes is the third of a series featuring Mystery Man, the owner of No Alibis, a mystery bookstore in Belfast. The never named owner of No Alibis (it's an actual Belfast bookstore) finds himself investigating the murder of Augustine Wogan, a forgotten mystery writer, whose wife has disappeared after going to a cosmetic surgery clinic run by a Dr. Yeschenkov. Aided by his girlfriend, Alison, and Jeff the shop assistant, Man solves the case. This is really sounding like a cosy now, isn't it?

The plot of  Dr. Yes is pretty generic, with only minor twists and turns. As I said, this novel's all about the comedy, and to that end Bateman makes Man a grab bag of comic cliches: he's a hypochondriac, he speaks his mind at inopportune moments, he's a coward, and he never passes up a chance to needle someone. The problem is that Bateman can't maintain a high enough level of comic writing. Bits and pieces of the book are amusing, and it's clear Bateman's a good writer, but too often Dr. Yes begins to sound like a mediocre sitcom. This is particularly true of the bantering between Man and Alison, which consists mostly of unfunny insults and comebacks. Their dialogue isn't mediocre sitcom writing, it's bad sitcom writing; think Everybody Loves Raymond bad. The best thing I can say about Dr. Yes is that at least Mystery Man doesn't solve his mysteries with the help of a cat. There are some lines that simply can't be crossed, even by sitcom writers.
Posted by Cary Watson at 2:01 PM