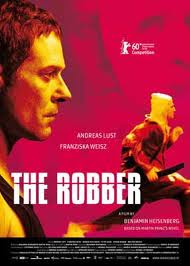 This Austrian film is based on the criminal career of Johann Kastenberger (called Rettenberger in the film), a marathon runner who also doubled as a bank robber. Kastenberger was a one-man crime wave, hitting a string of Viennese banks in the late 1980s before being captured by the police. He then made a daring escape from a police station and ended up being shot and killed at a police roadblock days later. This biopic changes some of the facts of Kastenberger's life and is also given a contemporary setting.

The Robber is very well made, technically speaking, but it's just about as lifeless a film as you could imagine. Half the problem lies in the character of Rettenberger. He runs, he robs, and that's all we know about him. He's a character without characteristics. Rettenberger walks around with a semi-catatonic look on his face for the entire film, which seems to be a perfect match for his zombie-like personality. Why is he like this? What's his background? It's all left a mystery and the film suffers badly because of it. We don't root for or against this guy, we just watch his actions in a half-interested sort of way.

The cinematography deserves praise, and the robbery sequences are efficiently handled, but too often the director lets his camera linger over shots that are lovingly composed, but have no impact. Overall, The Robber has a minimalist feel, as though the director was trying very hard not to be flashy and frantic. This was not the right approach. The robberies should give us the adrenaline rush that Rettenberger gets from running. In fact, it's made clear that this might be the motivation for his thefts; after one robbery he takes off a monitor that has been recording his heart rate, and we see that it spikes during the robbery. The director should have been equally concerned with spiking our heart rates.