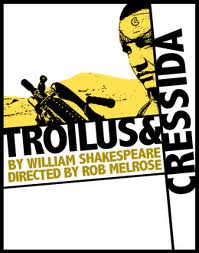 So, I'm going to start rereading, and in some cases reading for the first time, all of Shakespeare's plays. I'm starting off with Troilus and Cressida only because I saw someone at the library ordering it and I figured it's as good a play to start with as any.

Troilus is generally considered to be one of Shakespeare's "problem" plays, meaning it doesn't fit easily into the slots marked Tragedy or Comedy. Nor is it a history play in the sense that Julius Caesar is a dramatic retelling of historical facts. The play is set during the siege of Troy and revolves around Cressida's betrayal of her lover Troilus. After one night together Cressida, a Trojan, is exchanged for Antenor, a Trojan warrior held captive by the Greeks. Troilus enters the Greek encampment under a truce and finds that Cressida has almost immediately given her heart to Diomedes, a Greek. The play also gives equal time to the story of Achilles, and his stubborn refusal to join the battle because his plus-sized pride has been wounded, and the efforts of Ulysses and others to get him off his ass, as it were.

The most remarkable thing about this play is that Shakespeare seems to find almost all the characters contemptible. Really, only Hector, champion of the Trojans, comes away looking good. Everyone else is loutish, scheming, stupid, vain, or foolish. Even Achilles, the great warrior of legend, is shown to be petty and vicious. Instead of meeting Hector in single combat he begs off, claiming exhaustion, and then has his followers, the Myrmidons, trap Hector and spear him to death as though he was a farm animal slated for slaughter.

Shakespeare's dyspeptic feelings towards the Trojans and Greeks are summed up in the character of Thersites, a Greek, who plays the role of a fool, but not a poetic, lightly taunting fool. Thersites is an unfunny Don Rickles. He simply castigates anyone who crosses his path in the bitterest terms imaginable. At one point Thersites is cornered by a Trojan warrior and describes himself to a T:

"No, no, I am a rascal, a scurvy railing
knave, a very filthy rogue."

Shakespeare was a great promoter of the concept of kingly rule, the idea of an ordered society flowing down from a single ruler. The problem with the story of Troy is that is, at heart, a tale about a petty crime leading to the plunder of a city. There's not much that's noble there, although many nobles are present. Maybe this explains the problem aspect of the play; Shakespeare simply couldn't work up a lot of enthusiasm for his subject. On the Bard-o-meter this one ranks as a 5 out of 10.