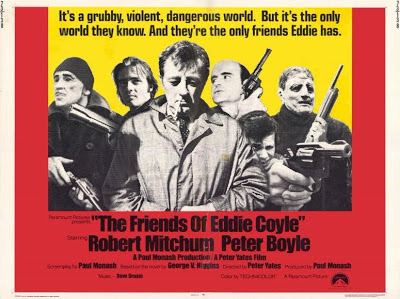 On the list of the most noir films of the 1970s this one probably comes out on top. Starting with its bitterly ironic title, right through to the cold-blooded, inevitable finale, The Friends of Eddie Coyle doesn't give an inch in its ruthless depiction of the mercenary relationships between cops and snitches, and between criminals.

For a film about cops and bank robbers and gun runners, Friends is relatively bloodless, but that's not to say it's not violent. The violence comes from the way the characters use and betray each other. Robert Mitchum plays Eddie Coyle, a Boston crook who is on the lowest rung of the criminal ladder. He's middle-aged, has a family, and supplements his blue collar job with the odd liquor truck heist. As the film begins he's worried about facing sentencing in a robbery in New Hampshire. Eddie's also supplying guns to a gang of bank robbers who have drawn the attention of the cops. In turn, Eddie is acquiring the guns from a gun runner named Jackie, who in turn is getting them from contacts he has on a military base. Peter Boyle plays a bar owner who is yet another criminal middle man, and both he and Eddie, unknown to each other, are being used by the same police detective as snitches.

Peter Yates was the director, and the realism he brought to Bullitt (1968) pales in comparison to Friends. Boston has never looked so gritty or drab, and the look of the film perfectly matches the sombre, desperate mood of the major characters, but especially Eddie, who is looking at several years in jail. He's done time before, but now he's just too old for it, not to mention having a family to support. Eddie's horrified at the prospect of his wife going on welfare or taking a job. It's part of the tragedy of Eddie that he thinks his criminality is more honourable than having his family take social assistance or his wife get a job.

What anchors this film is Robert Mitchum. This is one of his great performances, right up there with his work in The Night of the Hunter and Cape Fear. Unlike those two films, Friends required a more subtle approach from Mitchum. Eddie is, to a certain degree, a self-pitying loser, but he tries to cling to a sense of honour, and he's certainly committed to his family. Mitchum's rumpled face and sleepy eyes perfectly capture a man whose criminal career is winding down into disillusion and disaster. What's also notable about Mitchum's performance is that he so easily bridges the gap between old Hollywood and new Hollywood. This was a guy whose contemporaries from the 1940s and '50s were either fully retired or were restricted to doing cameos in all-star disaster movies. Mitchum's acting is of the same quality that Method actors like Hoffman and Pacino were starting to find success with. And I think Friends sometimes doesn't get the attention and respect it deserves because people associate Mitchum with a much older kind of filmmaking. In truth, this film feels much less dated that many others from the '70s. For my take on '70s "cop noir" check out the link below.

Film Review: The Seven-Ups
Posted by Cary Watson at 5:01 PM