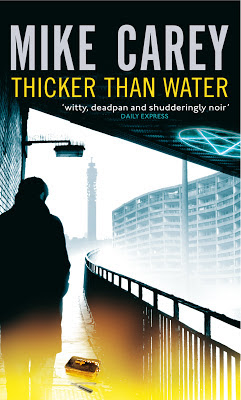 In an afterword to this novel Mike Carey describes how a section of it that takes place in Liverpool, where he was born and raised, morphed into something painfully autobiographical. He then had to do an edit to keep things more fictional and protect the innocent and guilty. Carey's act of flying too close to his autobiographical sun has paid off in what, up to now, is the best of the Felix Castor novels.

Felix Castor is an exorcist/gumshoe from the Philip Marlowe school of hard knocks and wisecracks, and he works in a contemporary London that has become infested with various forms of the undead. In this outing he finds himself accused of the murder of a childhood enemy who's been found slashed to death on a no-hope south London estate of giant apartment blocks. Felix soon determines that the entire estate is in the grip of violence that centres on stabbing and slashing, and behind it lurks a demonic presence. It also seems that the murder and the presence of the demon are events that have roots in Felix's past in Liverpool. I'll draw a veil over the rest.

What helps makes this book the best in the series is that Carey gets the balance between the mystery and the supernatural perfectly right. His previous book, Dead Men's Boots, was weak on the supernatural elements and was further marred by two supporting and recurring characters who ended up doing too much of the heavy lifting in the story. Carey's writing also seems sharper, darker, angrier, and I'm thinking that the autobiographical elements pushed him into producing something that's more serious. The previous novels are, at heart, bloody, but fun, romps around an alternate reality London that sits solidly in the urban fantasy genre. This novel strays into Ruth Rendell territory with a mystery that's as rooted in psychology and affairs of the heart as it is the supernatural. And the scenes set in Liverpool have an angry intensity and attention to gritty detail that brings Alan Sillitoe to mind. Not many fantasy writers manage to transcend their genre, but Carey's done it with Thicker Than Water.
Posted by Cary Watson at 4:06 PM