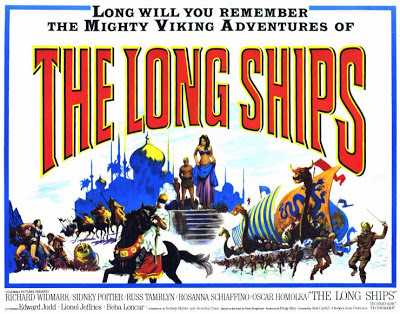 The Vikings were a race of warriors and seafarers who found America centuries before Columbus, terrorized all of northern Europe, and planted their DNA anyplace they pulled ashore for more than an hour or two. The only thing they weren't able to do was get decent representation in Hollywood. Despite being one of the most violent and colourful peoples in history, Viking movies are few and far between, and most of them are crap. The Vikings got the full Hollywood treatment in 1958 in the imaginatively titled The Vikings, starring Tony Curtis and Kirk Douglas, but after that it was B-movie all the way. The worst of the bunch was The Norseman, which had Lee Majors as a Viking invading Florida (!).

And so we come to The Long Ships, which for my money is the best of the bunch. I can't claim that it's a fine film, but as an exuberantly goofy and pugnacious Viking film it can't be beat. As is traditional with Viking films no actual Scandinavians were involved in the production. Instead, we get Richard Widmark, Russ Tamblyn, Sidney Poitier, and a supporting cast of Brits, along with an Italian, a Serb and an Austrian. Oh, and the whole thing was filmed in Yugoslavia, including the bits that are supposed to be set in Norway. The League of Nations cast produces a wonderful variety of unlikely accents amongst the Vikings; you know you're in a B-movie when Vikings are chattering away in Scots, Cockney, and BBC English accents.

The story concerns a rascally Viking called Rolfe (Widmark) who goes in search of a mythical giant bell which is supposedly made entirely of gold. He has to deal with a ruthless Moorish king (Poitier) who also wants the bell, and a Viking king who wants his head because he stole a ship. There is much energetic fighting, hearty laughter, manly oaths ("By Odin's teeth!"), a Viking raid on a  harem (cue the Benny Hill music), and that staple of Viking films, the banquet scene, which, as film tradition dictates, looks like a catered mosh pit. All the actors realize that they're in a goofball film and act accordingly. Poitier, coiffed like Little Richard, is a very hissable villain, and Widmark is athletic and light-hearted. This is actually the only Widmark performance I've ever liked. He always struck me as looking feral and creepy, like one of those weird school janitors who get up to pervy things in their utility rooms. Like I said, The Long Ships isn't quite a buried treasure, but it's a fine way to waste a couple of hours.
Posted by Cary Watson at 12:01 AM