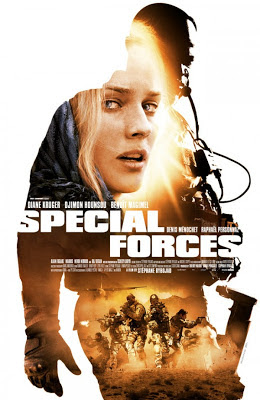 Regular readers of this blog (cue the sound of crickets chirping) will know that I have a soft spot for French films. I don't consider it a soft spot, I just think the French have a certain knack for thrillers that generally beats what Hollywood is offering. But just to show I don't play favourites, I have to nominate Special Forces as one of worst films I've seen this year. The problem is that the more the French try and ape American-style filmmaking and tropes, the more trouble they get into.

Special Forces is about an elite team of French commandos who are sent into Afghanistan to rescue a French journalist (Diane Kruger) who has been kidnapped by the Taliban. The plot is no more complex than the average John Wayne western, and a western is pretty much what this is, with the Taliban filling the role of the Apaches. The commandos slaughter loads o' Afghans, none of whom seem to have the least idea of how to take cover when engaged in a firefight. That's one of hoariest tropes on view in this film. In the older generation of westerns and WW II films the bad guys were easily identifiable as the ones who couldn't shoot straight, and who thought standing out in the open was a smart way to find out where the heavily armed hero was hiding. When I was kid, watching films like Where Eagles Dare and TV shows like Combat and The Rat Patrol, it bothered me so much that the Germans were incompetent buffoons that I actually began rooting for them as underdogs. Clearly, I was too young to know much about Nazi politics.

The other cliche that gets a good workout here is that of the small, elite military team that has one of those band of brothers bonds that stops just short of homoeroticism. This gang bickers, brawls and kicks Taliban ass, and mourns each death in the unit as though it represented a moment from the Twilight of the Gods. The Taliban clearly aren't suffused with such noble feelings, because they blithely leap over their fallen comrades on their way to being the next victim of French fire. Speaking of which, I'm getting tired of action films in which the leads carry their weapons in the prescribed military/FBI combat stances. I'm also weary of seeing commando teams giving each other inexplicable hand signals as they silently creep through a jungle or comb through buildings. Yes, I know it's all very accurate and true-to-life, and the actors probably all had a short spell in some kind of boot camp, but I just don't give a crap. This faux realism usually takes the place of crafting an energetic, smartly-choreopraphed action sequence. And if Lee Marvin, a Pacific War vet who did some actual killing, never held his gun in the officially approved FBI manner, then no one needs to do it.


Are there any redeeming features in Special Forces? Nope. It just proves that the French should stick to thrillers and spiky romantic dramas. And for God's sake can we please stop with the action films that look like training videos for grunts and police cadets?
Posted by Cary Watson at 4:13 PM