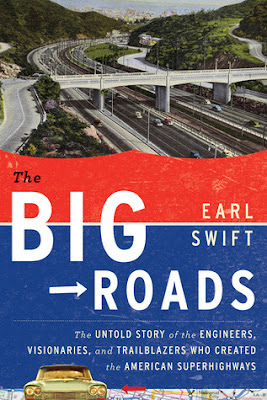 My family knows that there's almost no subject too obscure or odd for me to read a history about it. Witch trials in 17th century East Anglia? I'm there. A look at pre-revolutionary Russian art movements? Yes, please. But a book about the genesis and construction of the US Interstate Highway System? God, that sounds obscure, odd and dry. Turns out it's none of the above. Earl Swift has done a marvelous job of blending anecdotal history, big picture facts and figures, and personal experience into a story that adds another chapter to our understanding of how and why we North Americans became enslaved to the car.

One of the fascinating aspects of this history is that it's both a triumph and a tragedy. Prior to, say, the 1930s the car was in many respects a godsend for North Americans: people and goods could be moved to where they needed to be faster than ever; rural communities were no longer isolated from larger centres; and for the car owner there came a new sense of freedom and mobility that had probably never existed before. It's this last quality that lingers to this day in our sense of what owning a car means. Want proof? Just look at most every car ad on TV with their montages of young, happy people driving off to nowhere in particular, enjoying the sights, stopping in scenic spots to lark about or indulge in a bit of kayaking/mountain biking/snowboarding and so on. As fanciful as these ads can be, there is a kernel of truth in them: under ideal conditions the car takes us exactly where we want to go, precisely when we want to, and by whatever route we choose. It's as close to a personal teleportation device as we're ever likely to see. That's the triumph of the car.

I mentioned ideal conditions, and Swift shows us that by the 1940s, and even sooner, those ideal conditions were becoming rarer. Cities were suffering from gridlock, and the highways that led from city to city and state to state were badly maintained, poorly planned, and exceedingly dangerous. A growing chorus composed of  politicians, industrialists and high-level bureaucrats pushed the idea of "superhighways," roads that would move traffic rapidly across cities and across the continent. By the late '50s the construction of the current interstate system was well underway. It was the biggest public works project in US history and would eventually cost out at over $100bn. The interstates were an economic boon for most everyone, but even as they were being built critics were pointing out that city neighborhoods were being plowed under to make room for ugly, noisy highways, and, outside the cities, towns and businesses that relied on road traffic withered away as the interstates allowed travelers to avoid the slow road. This phenomenon even became a film plot point when Norman Bates told Marion Crane: "We have twelve vancancies. Twelve cabins, twelve vacancies...They moved away the highway." More collateral damage from the interstates.

By the mid and late '60s highways were widely seen as an eyesore and as agents of urban destruction and suburban sprawl. And the car began to be seen as a fundamentally unsafe creator of pollution and violent death. And all of this was true. This was the tragedy of the car, one that we still live with. Swift is no apologist for the car industry and he's quick to point out the many problems created by our carcentric lives. But at the same time he reminds us that despite all the drawbacks to cars and commuting, at a fundamental level owning and driving a car can be an ineffable pleasure. Most people probably hate ninety per cent of the driving they do, but that other ten per cent more than makes up for it.

Another interesting point that comes up in this book is the key role played by hard-working, selfless civil servants working for a federal government that was willing to tax and spend a colossal amount on what it saw as a common good. In today's political climate it's hard to imagine a project of this magnitude getting off the ground. Taxation has become anathema, government spending seen as a sin, and government employees are regularly vilified, often by politicians, as lazy, incompetent time-wasters. Expenditures of $100bn or more are now reserved for kicking the crap out of Middle Eastern countries. It's hard to spot any common good coming out of that kind of spending.

In the early '50s the car could do no wrong, and by the late '60s it was seen, in many respects, as a menace. It's interesting that his turnaround in popular opinion was mirrored closely by the tobacco industry. In the '50s cigarettes were still glamorous, endorsed by celebrities, athletes and even doctors! Most everyone smoked, and tobacco advertising was, along with cars, one of the pillars of the advertising industry. In 1964 the Surgeon General published his Report on Smoking and Health. One year later Ralph Nader published Unsafe at Any Speed, a devastating critique of the car industry. Within a one-year period two of the most potent symbols of social status, consumerism and affluence were on their way to becoming, to differing degrees, pariahs. We still drive and smoke, but, more often than not, with a sense of guilt and shame. It's one of the more bizarre aspects of modern life that we cling to two activities that are guaranteed to kill hundreds of thousands of us every year. If any other activity had this kind of death toll it would be illegal or subject to the Geneva Conventions.

We're not giving up cars in the foreseeable future, so we're left with the twin, and costly, problems of maintaining the highways we do have and building mass transit so we can get off the overcrowded highways. The Big Roads is an entertaining way to find out why you spend so much time sitting in your car, cursing at people who can't hear you.
Posted by Cary Watson at 11:18 AM