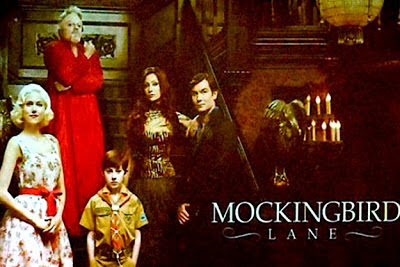 I happily admit I only watched the premiere of this NBC comedy series because Eddie Izzard's in the cast. Mockingbird Lane is a reboot of the The Munsters, one of those 1960s sitcoms in which a group of outsiders try and coexist with mainstream, white bread America. Shows like The Addams Family, The Beverly Hillbillies and Green Acres were built around this concept, and all of them took their ridiculous concepts as far as they could go.

Mockingbird Lane is too cool and ironic to let its hair down and have fun like its predecessor. It's energy and ambition is directed towards special effects and set design, both of which are first-class. The comedy? A lame afterthought. The humour is detached and observational, and the cast seems to be working at half-speed. It's as though the creators of the show took a look at the original series, shuddered in horror at its rude, frantic sitcom energy, and decided that their show must be nothing like that. One wonders why they bothered with a reboot.

The most disappointing part of the show is Eddie Izzard, who plays Grandpa Munster. Izzard is one of the best standup comedians of the last twenty years, but he just can't catch a break when it comes to TV and movies. Nothing he's done has managed to capture his uniquely absurdist sense of humour. This is probably because his improv style doesn't translate well to a scripted format, but that could be said about Robin Williams and he managed to find himself a sitcom that was tailored to his talents. I also have to say that Izzard just isn't a naturally funny actor. By comparison, Russell Brand, who isn't in the same league as Izzard as a standup, can make the simplest line of dialogue funny. As Grandpa Munster, Izzard delivers his lines with a cool wit, but doesn't add anything to the gags as they're written. The best you can say about his performance in this show is that it's workmanlike.

There isn't much to say about the rest of the cast since the script didn't give them much opportunity to shine. And Jerry O'Connell in a comedy? Who decided he's a funny actor? If this series sees life beyond this season they better decide to move some brainpower from the art and sfx departments over to the writer's room.
Posted by Cary Watson at 9:02 PM