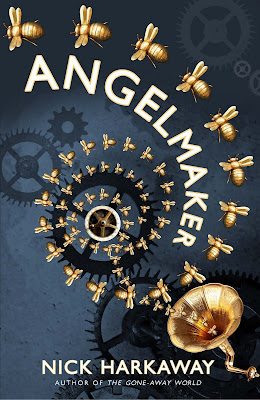 First off, with a name like Nick Harkaway the least you can do with your life is write a rollicking, violent, madly entertaining genre mashup of steampunk and SF about a madman's plot to destroy the world. But Harkaway should really be the fair-faced, clean-limbed commander of a frigate, or a polar explorer, or a smasher of plots to steal Britain's secrets and treasures. Instead of any of those more interesting life choices, Harkaway has given us Angelmaker. So be it. I hope he's happy with his decision.

There is simply too much going on in Angelmaker to provide a synopsis of reasonable length, so I'll stick to the highlights. The main character is Joe Spork, a thirtyish mender of clocks and automata, and son of the late and infamous Matthew Spork, a crook's crook in the London underworld. Joe receives a commission to repair a peculiar clockwork device and is thereby thrown headlong into a plot to destroy the world through the agency of the Apprehension Engine, a device that alters human consciousness so that it can always perceive the truth, thus causing, in theory, all kinds of strife. The evil genius behind this plan is Shem Shem Tsien, an ageless Asian dictator who's a charmless combination of Pol Pot and Vlad the Impaler. Tsien is aided by the Ruskinites, a priestly cult that worships John Ruskin, the Victorian art critic. Joe's allies are Edie Bannister, a retired spy who was the Modesty Blaise of WW II; a diverse group of ex-gangsters; and Polly Cradle, the woman who turns out to be the love of his life.

Like the best fantasy/steampunk writers, Harkaway doesn't let anything stand in the way of his imagination, which goes off like an oversized Catherine wheel.  Angelmaker is an excellent adventure story based solely on its imaginative energy and diversity, but Harkaway brings more to the party. Unlike most entries in this field, there's an anger and ferocity and, yes, political consciousness that sets it apart. The political sub-text to the novel isn't overplayed or blatant, but it's clear that the author, like his characters, is disgusted with the Machiavellian machinations of the Great Powers and Vested Interests that result in the existence and use of weapons of mass destruction. Looked at from this point of view, Tsien isn't just a stock villain but the distillation of the anti-human nature of realpolitik and the lust for total power.

This novel must also set some kind of record for Britishness. From its homage to P.G. Wodehouse opening (so good I'm nominating Harkaway for membership in the Drones Club) to it's Lancaster bomber finale, this novel is a feast of British cultural references; even the plot feels like it could have been one of the great Dr Who stories. Which is not to say it's some kind of Rule Britannia wet dream. Harkaway certainly doesn't present the British security services in a pleasant light, and at one or two points this begins to feel like an acidic State of Britain novel.

Harkaway's prose is another plus, shifting stylishly and effortlessly from tough to witty to psychologically acute. But this is also where Harkaway stumbles. The only real flaw in Angelmaker is that Harkaway's prose can also be maddeningly discursive, parenthetical and orotund. This type of writing is best enjoyed in small doses, but too often Harkaway can't put a brake on his rococo digressions. One example: late in the novel, as the tension and narrative momentum is building, we hit a speed bump in the form of a pointlessly lengthy description of a character's girth and sex life. This aside would almost be tolerable at the beginning of the story, but coming where it does it feels like the author is just faffing about. To put it in bald terms, Angelmaker would be significantly better if it was about ten per cent shorter. The other ninety per cent of the book is pure gold.