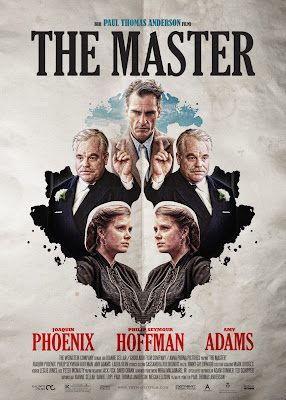 Like the cult leader at the centre of this film, The Master has presence, style and bombast, but it's also resolutely shallow, long-winded and illogical. Joaquin Phoenix plays Freddie Quell, an alcoholic and all-around dim bulb who comes into the orbit of the "Master". The Master (Philip Seymour Hoffman) is Lancaster Dodd, founder of a cult that bears a passing resemblance to Scientology. In what amounts to a nearly plotless story, Freddie, who would have difficulty holding down a job as a ditch digger, becomes Lancaster's pet project. He keeps Freddie around despite his failings and works to indoctrinate him in his nonsensical ideas about past lives.

The fact that the film looks great and features top-notch acting can't paper over the fact that it doesn't muster a coherent point of view or purpose. The film's main focus is on the relationship between Freddie and Lancaster, and just on that basis the film is a total bust. Freddie is such a witless, loutish fuckup it makes no sense for Lancaster to keep him around. Freddie is the kind of person who makes other people feel intensely uncomfortable and/or creeped out, and Lancaster's inner circle certainly don't seem to like him, so why is Lancaster taken with him? There's no hint of a sexual attraction so we're left with the realization that their illogical relationship is simply the result of bad screenwriting.

The Master also suffers from a surfeit of what could be called arthouse film aesthetic. In practical terms this means scenes are extended past their natural expiration date; meaningful pauses abound; eye-catching shots and artful production design takes precedence over narrative; sequences that should be cut aren't; dialogue is prolix and redundant; and character motivation is always opaque. Writer/diretor Paul Thomas Anderson takes the blame for all this, and unfortunately his stock has been trending downward ever since the superlative Boogie Nights. All his films since then have featured superb acting performances, but his craft as a storyteller has become clumsy and murky. This is hands down Anderson's worst film, and the generally favorable, even fawning, reviews it's received reflect the enthusiasm critics have for Anderson's visual craft and way with actors rather than for his ability to make a film that's as smart as it is sharp-looking. The Master is certainly the best-looking film I've seen in quite a while, but it's also, like Freddie, the most empty-headed.
Posted by Cary Watson at 12:10 AM

Thanks JC: I thought this movie might live up to Voltaire's quip on the origin of religion: "when the first scoundrel met the first fool." After reading your thoughts I'll give it a pass.

Hey - where's your review of "Masters of Atlantis"?

A review of Masters of Atlantis? I'll get right on it.

I came into The Master ready to be outraged for a Best Picture Oscar snub, then despaired, scene-by-scene, until I lost all hope. Agreed on almost every count. Love how you described its "arthouse film aesthetic." It took me twice the words to get across the same thoughts.

Thanks, Benjamin. Despair is the right word. I started the film full of enthusiasm, and then...bleh.