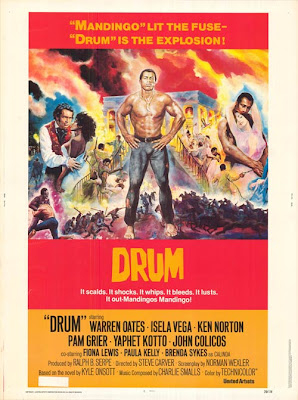 Django Unchained, which I reviewed back in January, is a bad film. Drum, which I caught on Netflix last night, is also a bad film. Both films are about slavery in the Old South but in some significant ways Django stands out as much the worse film. Drum has no pretensions to being anything other than a middling budget exploitation picture. The story revolves around slavery, but what's on sale here are copious amounts of violence and female nudity. The title character, played by boxer Ken Norton with a woodenness that sends splinters shooting off the screen, is a slave raised in a New Orleans whorehouse. His mother Mariana, who is white, owns the bordello, but has never told Drum that he's her son. Drum thinks his mother is Mariana's faithful maid. Drum catches the attention of DeMarigny, a Frenchman who's, well, let's just say he's a triple-coated villain, a man so low he stole his French accent from Pepe Le Pew. DeMarigny wants to use Drum as a fighter against other slaves, but Drum is a reluctant scrapper. After a variety of brawls and murders, Drum must flee New Orleans. Mariana sells him to Hammond, a slave owner who has a plantation on which he does nothing but breed slaves. More nudity and violence ensues, climaxing with a slave rebellion that leaves almost everyone, white and black, dead. Roll credits.

As mentioned, Drum is an exploitation picture and on that basis it earns a blue ribbon. There's nary a scene that doesn't feature sex, violence or nudity. What's rather amazing is that the script manages to pull in all the exploitation elements without interrupting the narrative flow. Everything about Drum is lurid and over-the-top, but the script is a solid, logical piece of writing. The scriptwriter also earns points for the dialogue, which is pulpy to the max and not afraid to sound ridiculous. Some credit also has to go to the cast. Pros like Warren Oates, John Colicos, Yaphet Kotto and Royal Dano tackle their lurid characters with gusto and almost manage to compensate for "actors" like Ken Norton. Lastly, the film deserves credit for an ending that adheres to reality (the blacks are wiped out) and also allows for some ambiguity. Hammond (Warren Oates) is in most respects a thorough villain, but a brief scene earlier in the film involving the beating of a slave shows us that a part of him (a very small part) is conflicted about treating humans as chattel. In the last scene in the film Hammond chooses to let Drum escape rather than gun him down as he would have every reason to do as white slave owner. It's a surprising ending for what's otherwise a pretty conventional film.

The strengths, relatively speaking, of Drum do a good job of highlighting even further the deficiencies of Django Unchaned. Tarantino's script is a mess: uneven in tone, overlong, and stuffed with gratuitous scenes and dialogue. Drum's script isn't going to win any awards, but it's model of efficient storytelling, and when the word "nigger" is used it's done in a natural, honest way. When Tarantino writes "nigger" in his scripts I always get the feeling he does it to prove how naughty he is. An odd thing about Tarantino is that as much as he's a devotee of genre/exploitation pictures, he's also a prude. Quentin is happy to show people being riddled with bullets or saying "nigger" with every breath, but nudity? sex? God forbid! Miscegenation was the primal fear and fantasy of Southern society, but it doesn't exist for Tarantino. The ending of Django stands in stark contrast to that of Drum. In Tarantino's wish-fulfillment fantasy world (see Inglourious Basterds for further evidence) the black hero rides off into the sunset with his white enemies all slain, his girl by his side, and a horse that can dance. Drum runs off into the night with nothing but a look of terror on his face. No prizes for guessing which film is more historically accurate.

I'm not going to say that Drum is a good film, but for the demographic it was intended for it succeeds brilliantly. And if it reminds you in any way of Django Unchained that's because Tarantino seems to have stolen been heavily influenced by elements of Drum. And for optimum viewing pleasure both films should be seen at a drive-in accompanied by your favourite legal/illegal stimulant.

I'm not a Tarantino fan but your descriptin of him as a prude is preposterous.

Sex and what is almost always female nudity in films is entirely exploitative. To call Tarantino a prude because he doesn't try to sell his films by getting his actresses to take their clothes off is astonishingly ignorant and backward thinking. That makes you far creepier than he is.

In the context of the genre/exploitation films he idolizes, he is a prude. And as I said in my review he completely sidesteps the issue of miscegenation which is central to any kind of story about slavery in the South. And if he isn't "selling" his films with female nudity, he's surely selling them with graphic, and often gratuitous, violence. Unless you regard nudity as fundamentally wrong, why not have it films? Do you find the sight of someone exploding in a cloud of blood less unsettling than seeing a naked woman? If you prefer to see graphic violence over nudity, that's what I'd call creepy.

You could avoid the n-word in your reviews, JC. It's usually and rightly avoided nowadays, and spelling it out appears callous (not to mention reactionary), which I'm sure you don't intend.

Since Tarantino douses his films with the "N-word" it seems silly and excessively pious to not use the full spelling in a review of one of his films, and I was making the point that his use of the word is, in my view, done for shock value. But does Tarantino's use of the word make him callous and reactionary? I don't think so.

Too many bloggers amp up the snark or attempt to crack wise in their reviews.

"bad" movies are the perfect foil for every too cool for school snarky blogger who makes it all about me, me, me as they crack jokes and eviscerate a movie for no discernible reason other than to perform.

You reviewed the movie. Told us what it was about, who was in it, the story being told and your opinion of the story, the acting and everything else and in between.

As a result, I can make a decision to view the film or not view it based upon an educated opinion of someone who set out to deliver a review and not an article for Cracked.

Solid stuff and I now am going to see what else you have reviewed.

Thanks, Anon. I have to admit some of my other reviews are probably pretty snarky.