Coming Soon To A Country Near You: Cruel Britannia 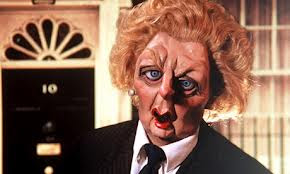 In one of Paul Theroux's travel books (sorry, I can't remember which) he said that some countries seem perpetually stuck in their own unique time lines: Turkey, for example, always seems twenty years behind the times; the U.S. is always in the here and now; and Britain and Japan are perpetually one week ahead of everyone else. There wasn't anything scientific in Theroux's analysis, just the feeling that in the case of Britain and Japan, the next big things in culture and technology always seem to be coming from those two countries. There's a kernel of truth in this, which is distressing news for the rest of the world if you've paid attention to British politics in the last couple of years.

In Britain, class warfare is the new black, and fashion-conscious right-wing governments and political parties around the world will be taking notice and adjusting their wardrobes accordingly. Britain's coaliton government, led by the Conservatives under David Cameron, has been aggressively pursuing a fiscal austerity agenda, and their most recent budget put the boots to the millions in the U.K. receiving various kinds of social welfare payments, everything from disability benefits to housing allowances, not to mention opening the NHS to privatization. In sum, the working poor, the unemployed and the disabled are being forced to pay for the follies of Britain's banking sector, a tax system that seems to have been designed by and for Russian oligarchs, and a military that still thinks it's guarding an empire. So Cameron's government has been passing out a lot of economic poison pills to what used to be called the working class (when there was work), but what, one wonders, have they done to put a positive spin on this program of impoverishment? Simple: justify it by tacitly claiming that the people being harmed are scum anyway, so what's the problem? They deserve it. 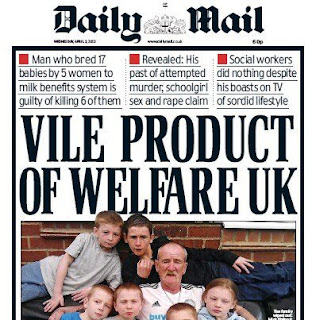 This past week in England a verdict of guilty was brought down against the Philpotts, a loathsome couple who burned down their own house in a bizarre scheme to emerge as heroes after they rescued their six children. All the children died in the fire. The front page of the Daily Mail is the end product of a campaign by right-wing media outlets and politicians to portray people receiving any kind of social assistance as "scroungers", "parasites" and "feral". These people don't "have" children, they, according to the Daily Mail, "breed." Taking his cue from the tabloids, George Osborne, Britain's Chancellor of the Exchequer, wasted no time in inferring that the Philpotts' crimes were somehow a result of social welfare spending. What we have here is no less than class warfare, albeit a war that is completely one-sided. Britain's right-wing papers are to the Conservatives what Fox News is to the Republicans in the U.S., and on behalf of the Conservatives they have been waging a propaganda war against the working class, furiously stoking resentment and fear amongst the middle class, and turning the working poor against those living on the "dole."

Papers like the Sun, Daily Mail and the Telegraph  accomplish this by acting as a media form of Predator drone, keeping a lidless eye focused on Britain's have-nots. Should any member of the underclasses engage in some kind of benefits fraud or enjoy a glitzy "lifestyle" thanks to social welfare payments, the papers authorize a launch of hyper-intensive press coverage that mocks and demonizes both the individual and the welfare state that has supposedly created this monstrous person. The gaudy Philpott case has encouraged the right-wing press and their Conservative pilot fish to come out into the open with their cynical strategy of scapegoating and punishing the underclass in order to enrich the classes above.

This kind of open class warfare hasn't yet made the jump to North America. In the U.S., politicians like to pretend there's no class system, and any attempt to vilify the mostly African-American underclasses runs the risk of being viewed as undiluted racism. What happens instead is that Fox News and the like spend most of their time attacking/smearing those advocating or defending what are perceived as left-wing causes. Here in Canada, the federal Conservative government is waging a relentless propaganda campaign (paid for by the taxpayer) that extolls the benefits of Conservative rule. In their eyes, the underclass is anyone who opposes oil sands development. This is not to say that playing the class warfare card won't happen in either country. Rightists throughout the world increasingly sing from the same hymn book, so if a winning right-wing formula emerges in one part of the world, it's sure to be copied in another.

The interesting question is why the class warfare card is being played now in Britain. The simple answer is that this is the natural next step in the capitalist counter-revolution that began with the election of Margaret Thatcher in 1979. In the decades after WW II most Western governments enacted wide-ranging social welfare policies and looked upon unions with favour, or at least tolerance. The main reason for this, especially in Europe, was fear of communism. Thatcher put an end to all that. Capitalism, flying under the banners of Thatcherism and Reaganomics, was determined to roll back the economic order to a state that pre-dated WW I. Using terms like globalization, rationalization, healthy competition, and meritocracy, rightists presented this counter-revolution as an exercise in scientific, logical management of the world economy. That myth dissolved in the international financial crisis of 2007-08. What to do next? In Britain, it seems the answer is to take the PR filters off and have at the underclasses with all the vitriol the tabloid press can muster. And who can blame them? The upper classes have been searching for a new blood sport ever since the ban on fox hunting in 2002. Tally ho, and see you on the barricades!
Posted by Cary Watson at 4:20 PM