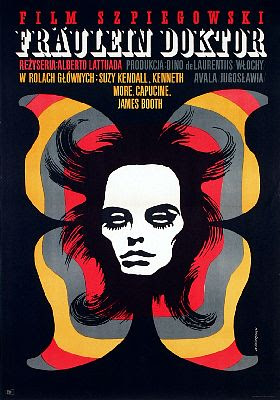 In the 1960s and '70s there were two kinds of B-movies in Europe. The most common kind were just like B-movies elsewhere: low-budget, unambitious, and full of cheap thrills. The other kind were films made as co-productions in Yugoslavia. The benefits of shooting in Yugoslavia were that local crews were cheaper, the country's varied terrain could double as Africa or even Norway, and, most importantly, the Yugoslavian Army was very obliging in allowing its men and equipment to be used in big battle scenes. And that's why films like Kelly's Heroes, Taras Bulba, The Long Ships and Genghis Khan ended up there; if your budget was limited but you wanted some spectacle in your film, Yugoslavia was the only choice.

Fraulein Doktor is one of the better made-in-Yugoslavia films from that era. The lead actors are all British, the key behind-the-camera people are Italian, and the hundreds of extras are, of course, the Yugoslavian Army. These Tower of Babel film productions usually exhibit all sorts of glitches, usually involving badly-dubbed local actors and production values (excluding battle scenes) that are a bit thrift shop. Fraulein Doktor is surprisingly well-made from start to finish. Set during WW I, the title character is a German Mata Hari-type spy played by the ravishing Suzy Kendall. The plot is more episodic than it should be, with the film starting with Doktor sneaking into England to arrange the assassination of Lord Kitchener. One of her fellow spies is caught and is turned by British intelligence. There follows a lengthy flashback in which we see Doktor steal a French poison gas formula by seducing the female scientist who invented it. Doktor then moves on to a scheme to steal the plans for the allied defensive positions on the eve of General Ludendorff's big offensive late in the war. Hot on her trail is Kenneth More as the head of British Intelligence and James Booth as the traitorous German spy. The ever-suave Nigel Green plays More's opposite number in German Intelligence.

What makes this film a cut above others from that era is a first-rate cast, a plot that handles the espionage elements with originality and intelligence, and, most importantly, an amazing final sequence that shows a gas attack on the French and British trenches. It's a truly hellish and original sequence, with German troops and their cavalry horses covered in protective suits to guard against a new gas (the one stolen by Doktor) that kills on contact with the skin. Fraulein Doktor didn't do very well at the time, which is probably due to a combination of a very downbeat ending and a heroine who is a German patriot. I don't think it's available as a DVD, but Netflix is currently showing it.