Book Review: The Baron in the Trees (1957) by Italo Calvino 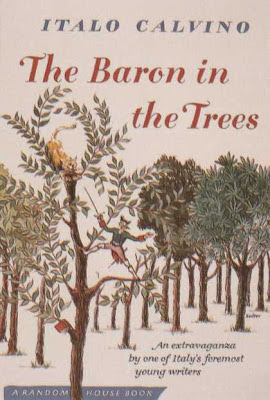 How much did I love this novel? If someone gets a Kickstarter going to adapt it into a film, put me down for one million dollars. I'll have to borrow the million first, but you get the idea. The title character is Baron Rondo, the eldest son of a noble family living on a large rural estate near Genoa. On June 15, 1767,  the twelve-year-old Rondo, in a fit of pique over a dish served to him at the family dinner table, climbs up a tree and refuses to come down...ever.

Rondo is true to his word and spends the next fifty-plus years living a completely arboreal life. He learns to move with incredible agility across the forests of the region, but he's no hermit or wild man of the woods. Rondo continues his education, writes pamphlets and runs a newspaper, conducts love affairs, engages in acts of heroism and bravery, maintains a correspondence with some of the leading intellectuals of the time, and generally makes his life in the trees almost as comfortable as life in his ancestral palazzo.

The jaw-dropping brilliance of this novel is that it works as both a charming fantasy and as an acute novel of ideas. As a fantasy, Calvino shows some amazing skill as a world-builder; Rondo's life in the treetops is fully and imaginatively realized, and there's a host of sequences that are begging to be filmed. There are fights with pirates; treetop lovemaking; battles with packs of starving wolves; a troop of French soldiers covered in living vegetation; and a final scene that's as heartbreaking as it is extravagantly visual.

As much as this novel is a fantastical, lavishly imagined folktale, it's also about the birth of the modern world. The society Rondo is born into is one of aristocratic privilege matched with a deferential peasantry. Over the course of his life the Enlightenment produces the French Revolution, which is followed by Napoleon's rubbishing of ancien regimes throughout Europe, and as the novel ends there are hints of reactionary political forces coming to the fore. Rondo is, in his limited way, a liberal and a bit of a revolutionary, but what his odd life choice seems to represent is the ascendancy and triumph of the individual in society. His entire life, as eccentric and as uncomfortable as it is, is an expression of what he wants to be, as opposed to what society, from high to low, expects him to be. Rondo has cast off all the expectations of his family, class and society to literally move onto a different plane of existence.

The Baron in the Trees is also whimsical, funny, sad, and features a charming and poignant love story between Rondo and the beautiful Viola, a noblewoman who's as enthusiastically individualistic as he is, which, of course, means trouble all around. I really can't recommend this book enough. It's a superlative, one-of-a-kind fantasy that's in the same league as Mervyn Peake's Gormenghast novels or Mikhail Bulgakov's The Master and Margarita. And don't forget what I said about Kickstarter; I'm good for at least $100 this week.
Posted by Cary Watson at 12:14 AM