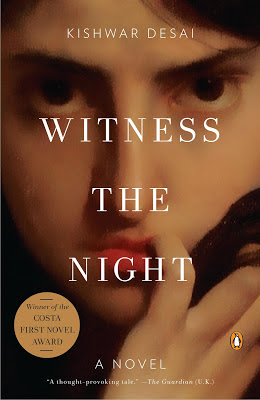 As a novel and a murder mystery Witness the Night is a fairly comprehensive car wreck. The plot is clumsily structured; Simran Singh, the sleuth/social worker, is a poorly-stitched together variety of cliches; and the prose is utterly bland. So why am I reviewing it and why did I bother reading it through to the end?

What this novel has in spades is white hot rage at the gender discrimination and misogyny that bedevils life in modern India. Desai's background is in journalism, and it's obvious that her book is an attempt to throw a harsh light on the attitudes towards women that result in ferocious crimes that largely go unreported, unpunished and are widely accepted. Desai's anger and her exposure of the tragic state of affairs for Indian women  gives the novel an energy that just manages to keep it readable. In effect, the novel is a polemic, and that's the only level on which it succeeds. This also makes it somewhat similar to some other Indian novels I've read in the last couple of years, such as The Peacock Throne, Serious Men, Partitions and Difficult Daughters. All four of these novels examine political and social issues, past or present, through a fictional lens, and they do it with imagination and acute intelligence. And writers such as Rafik Schami, Aziz Chouaki and Yasmina Khadra do the same for the Middle East and North Africa.

What makes this interesting is that writers from non-English-speaking countries seem to be the only ones keeping alive the tradition of writing novels that take a forensic look at what society is up to, particularly as it applies to ordinary men and women. The "social novel" was created in the nineteenth-century by authors such as Dickens, Zola, and Balzac, and in the last century the torch was passed to American writers like Steinbeck, Upton Sinclar, and Frank Norris. The social novel as a genre now only seems to exist outside of the English-speaking world. We Anglos have no shortage of social problems that could be discussed in a fictional format, but either writers or publishing houses or both seem reluctant to explore the market for this kind of novel. Take a quick scan of what the stars of literary fiction have been up to over the last decade and you see a lot of novels about relationships, historical fiction set in the very distant past, and post-modern deconstructions of assorted literary styles and genres. A strong argument can be made that the best crime fiction writers are the new social novelists, but that's a lengthy discussion for a future blog post. What seems clear is that Anglo literary fiction has, to a degree, withdrawn from the challenge of examining social upheaval and political change. It's a pity because novelists in India and elsewhere are spinning societal crises and political conflicts into literary gold.
Posted by Cary Watson at 11:15 AM