Film Review: Behind the Candelabra (2013) 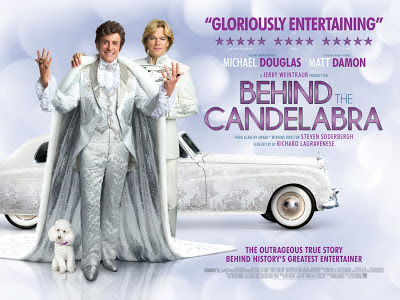 Director Steven Soderbergh has stated that Behind the Candelabra is to be his final film before a hiatus from filmmaking. Good. Based on this film it's clear Soderbergh has nothing to offer the general public, or even fans of esoteric indie films. It's hard to imagine a more pointless, lazy, calorie-free film than this one. Soderbergh gives the film a sleek, glittery, Las Vegas kitsch with extra epaulettes look, and his actors are excellent, but the whole production is baffling in its lack of purpose or point of view.

Vegas showman/pianist Liberace and his boyfriend Scott Thorson are the subjects of this biopic. The story of their relationship goes in a predictable arc from infatuation to disillusion to divorce, and this paint-by-numbers approach is handled in about as original and insightful a manner as an Entertainment Tonight celebrity profile. The only aspect of Liberace's life and career that's at all interesting is that his stage persona was flamboyantly gay, but he resolutely maintained that he was straight. It's not surprising that a performer of his era would stay in the closet, but why were his fans so willing to suspend their disbelief and go along with this fiction? It's an interesting question but it's not answered or addressed here. The film is more fascinated by moments of weirdness from Liberace's life: his mother playing slots on her own, Liberace-supplied machine; interior decor that embraces the grotesque; Liberace's voracious sexual appetite; and Liberace's plastic surgeon, a man who's possibly even weirder than Liberace himself.

The vanity, shallowness, excess,  and narcissism of stars like Liberace is not news. Various biographies and biopics over the years have told us the same thing about people like Elvis, Michael Jackson, and a host of others. This film can't break out of the rut of simply itemizing the eccentricities of its main character. And what are we to make of Scott Thorson? He's a poor kid from a broken home and simply seizes the main chance when Liberace comes along. There's nothing to him other than his relationship with Liberace, just as there's nothing to Liberace other than his love of tacky furnishings, outrageous costumes and pretty young men. Is Candelabra a critique or analysis of the vanity and emptiness of celebrity? Not really, it's more of victim of Liberace-itis: in love with prettiness and cheap emotions.
Posted by Cary Watson at 4:56 PM