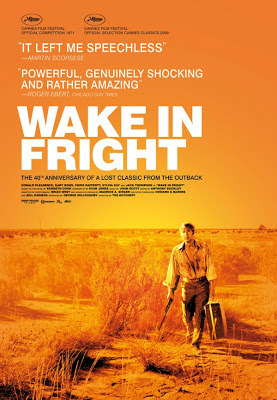 Well, I didn't see this one coming. The blurb on the DVD case led me to expect some kind of thriller in which a schoolteacher battles for his life against Aussie yobbos in the outback, a kind of all-male Straw Dogs. I can understand why the blurb writer might have resorted to this plan of attack because what actually happens is far more subtle and ambiguous. The teacher, John, is working in a one-room schoolhouse in what looks like the emptiest, flattest, most desolate piece of real estate on Earth. It's the Christmas break and he heads by train to Yabba, a mining town, to catch a flight to Sydney. It's clear that John, who is English, is dying to get back to civilization and is regretting whatever steps led him to end up teaching in the outback.

John has to spend the night in Yabba and unwisely goes on a gambling spree that costs him all his money. His motivation for gambling is that if he quits teaching he'll forfeit a $1,000 bond to the government. He hopes to win enough money to free himself from this indentured servitude. Thus begins John's descent into a personal hell. He's "befriended" by a variety of boozy, loutish locals who over the next 48 hours or so practically drown him in beer and testosterone. Oh, and there's a drunken, late night kangaroo hunt that ends with John going mano-a-roo armed only with a knife.

What this film isn't is a thriller or an action film. It's primarily an unflinching, critical look at Australia's macho, matey culture. The outback in this film might as well have a giant sign over it that reads MALES ONLY. Women drift around the periphery of the story but receive less attention than dogs or, of course, beer. The only woman of note in the film walks around with a zombiefied look on her face, apparently numbed by all the macho posturing. One line says it all about relations between the sexes: a Yabba local notices John talking to a woman and asks one of his mates, "Why would he talk to a woman when he could be drinking beer?"

It would have been easy for the film to take a condescending look at the stupidity and coarseness of outback males, but what  makes it better than that is that John becomes a willing participant in his own degradation. At the beginning of the story he sees himself as superior to everyone around him, and it's hard not to disagree with his point of view. What's brilliant about the story is that John becomes a willing participant in his own downfall. Like a  doomed character from a nineteenth-century Russian novel, John takes one crucial misstep that drastically and painfully alters the smooth course of his life. He discovers that part of him embraces the feral, alcohol-fueled life of Outback Man. There's even a suggestion that thanks to all this drunken male bonding and camaraderie, John has had sex with one of his new manly friends.

The actors range from very good to excellent, with Donald Pleasance a standout as a creepy doctor who lives in an alcoholic haze in a shack. Gary Bond, who looks a bit like Peter O'Toole, plays John and does a nice job of making his character's fall from grace seem plausible. But most of the credit has to go to Ted Kotcheff, the director. It would have been so easy to make this story overly dramatic, but Kotcheff takes a documentary approach that makes the film's greasy, grisly events seem all the more horrible and believable. Wake In Fright is definitely not for all tastes; in fact, I can almost guarantee it will leave a bad taste in your mouth, which, of course, is exactly what happens to John, although his hangover comes at a steeper price. And if someone wants to redo the blurb on the back cover, I'd suggest they describe it as a feverish, beer-soaked Australian version of Deliverance.
Posted by Cary Watson at 1:47 PM