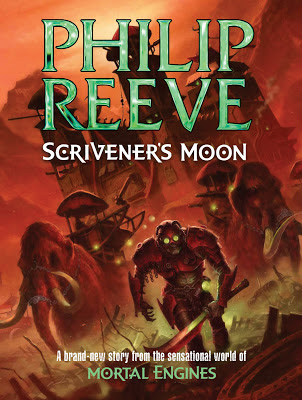 With this, the third and concluding(?) prequel to the four volume Mortal Engines series, Philip Reeve has created what has to be the gold standard in steampunk literature. Or perhaps I should say the brass standard. One of Reeve's best attributes as a steampunk writer is that he's not self-conscious about it. The seven novels in his imagined world aren't overly barnacled with the bling of steampunk, such as quirky, Victorian-themed nomenclature; heroes and heroines who are more ripping yarn archetypes than real characters; cameos from famous individuals, both real and fictional; and an obsession with all things that produce steam and smoke and are covered in brass. Reeve reverse engineers his novels, as it were, by starting with some dazzling creative concepts, adding in clever plots, and finishing off with well-rounded characters. With those building blocks in place the steampunk elements are never made to feel like the main attraction. Too many writers make the window dressing of steampunk the entire purpose of their novel.

Scrivener's Moon, which is set in the far, post-apocalyptic future, finishes the story of Fever Crumb, a teenage girl who's witness to the birth of London as a mobile, heavily armed city. It's almost impossible to do a synopsis of the story without launching into a lengthy outline of all seven volumes, but rest assured that Reeve's skill and imagination are undiminished in what might be his final outing in this genre. What's particularly pleasing is that his sense of humor remains intact. The term "post-apocalyptic" doesn't usually go hand in hand with humor, but Reeve knows that a largely grim story needs a bit of balance, and his sharp wit provides that contrast. And bonus marks for the subtle and natural way in which he shows Fever discovering that she's gay.

And now for a word about steampunk. There are endless, geeky arguments about what steampunk is or isn't, but my simple but comprehensive theory is that a steampunk novel is always set in either an old-fashioned future or a futuristic past. So there. This unruly bastard child of SF and the traditional adventure novel has attracted a lot of top-notch writers. Reeve, Nick Harkaway, Jonathan L. Howard and Toby Frost have all produced highly original, funny and exciting novels in the genre. What they all have in common, aside from talent, is that they're all British. Coincidence? I think not. I have a theory that the present dominance of UK writers in the steampunk field can be traced to TV shows like Dr Who, The Avengers, Quatermass, and all those Supermarionation shows such as Thunderbirds. The commonality in these programs is that anything goes, imaginatively speaking. Those shows mixed and matched all kinds of plots, characters and genres in the name of adventure and humor. Dr Who and The Avengers were particularly gleeful and energetic in this regard, and both were among the most popular and long-lasting shows of the 1960s and '70s. Today's steampunk writers grew up on those shows and I think it's fair to say that their ability to synthesize disparate genres into coherent, gripping stories owes a lot to Steed, Mrs Peel, the Doctor, and Captain Scarlet.
Posted by Cary Watson at 11:38 PM