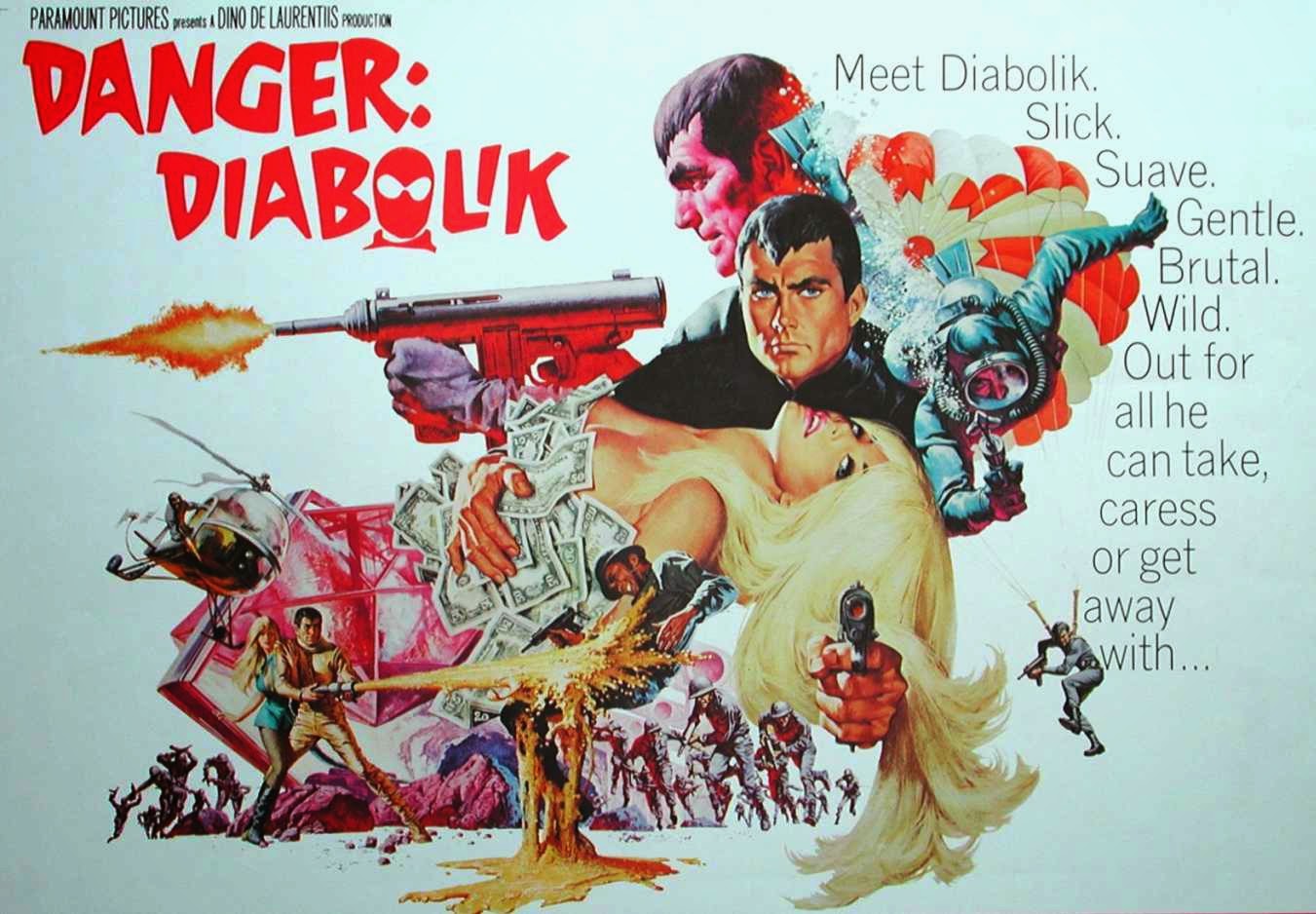 I'm not going to say that Danger: Diabolik is a fine film. No film starring John Philip Law, an ambulatory totem pole of an actor, can stake any claim to greatness. It is, however, a wonderful B-movie, even a cult film, and what makes Diabolik special is something that's representative of Italian cinema of the 1960s: a frantic desire to startle and delight the audience with over-the-top visual elements and eccentric soundtracks.

Diabolik (a character from a popular series of Italian comic books) is an anti-hero masterthief who steals from the rich and gives to himself. He wears a ridiculous latex catsuit, kills policemen who get in his way, has an eye-popping underground lair and an equally eye-popping girlfriend, Eva, who wears outfits a stripper would blanch at. The plot has Diabolik stealing jewels and a gold shipment, running afoul of a gangster, and rescuing Eva from a kidnapper. As befits something based on a comic, the action is fast and silly, and the story whizzes by with only a passing wave at logic and the laws of physics. A great many contemporary superhero movies could learn a thing or two from Danger: Diabolik. Here's a taste of what's on offer in the film:

Lots of critics point to the American cinema of the 1970s as a golden age in filmmaking. Certainly from the point of view of storytelling, directors such as Hal Ashby, Peter Bogdanovich, William Friedkin, Francis Coppola, Bob Rafelson, Sidney Lumet and the like set new standards in what kinds of stories could be told, the honest depiction of sex and violence, and the use of actors who looked like the man or woman on the street rather than groomed movie stars. But for my money the Italian films of the previous decade (with some spillage into the early '70s) were a more true golden age. Italian filmmakers of this era were busy playing with the language of film, finding new ways to use all the tools in the filmmaker's utility belt from sound to costuming to set design to music to cinematography (here's a link to my related post on "gesamtkunstwerk" films).

Federico Fellini would be the poster boy for Italian films of this period. His films are studies in artfully combining all the visual and aural qualities available to a director. If you were asked to think of a memorable moment from any Fellini film from this period you'd most likely recall a scene with extravagant sensory appeal. Ask the same question of, say, a Coppola film from the '70s and you'll most likely think of a scene that's important to the plot or defines a character. To put it another way, American directors were novelists, Italian directors were conceptual artists. Check out this "fashion" show from Fellini's Roma:

Fellini was far from the only Italian director creating films that used everything in the filmmaker's toolkit. Sergio Leone redefined and deconstructed the western almost entirely through his use of visuals and Ennio Morricone's iconic music. As with Fellini, Leone's most memorable sequences in the Dollars films are those that combine bold cinematography and even bolder music, such as this one:


What the two clips show is that Italian films of that era often seemed to put the cinematography and music in competition, with each element trying to outdo the other in originality and power. American and English films of the time generally don't do this; the music supports the visuals in these films, whereas in Italian cinema it sometimes seems the music is trying to elbow the visuals aside and vice versa. Composers like John Barry and Maurice Jarre composed soundtracks that complemented the film. Morricone, Riz Ortolani, Nino Rota and Carlo Rustichelli produced soundtracks so distinctive it was though they were daring the director to create visuals that lived up to the music.

Michaelangelo Antonioni, Bernardo Bertulucci, Pier Pasolini and Elio Petri can be added to the list of Italian directors maximizing all the possibilities film has to offer, and that brings us to the question of why the Italians and not so much everyone else? I don't really have an answer for that, but I'll toss out a few theories. The first is that many Italian directors came to film after having attained success in other fields. Bertolucci, Pasolini and Fellini were writers first, Petri a political activist, and Mario Bava, the director of Danger: Diabolik, began as a painter. These were people who brought more to the party than a degree from a film school. And then there's Catholicism. Did the intense visual symbolism and pageantry of Catholic churches and religious processions create a strong appreciation for meaning and story transmitted entirely through visual means? Finally, there might be a technical reason for the visual strength of Italian films. It was customary in Italian cinema to "loop" or post-dub all the dialogue. This meant that directors didn't have to worry about the position of sound equipment when framing shots or mapping out camera movements; and because there weren't any flubbed lines to worry about, or time spent coaching actors on their line readings (actors were often told to just count out loud during on-camera dialogue scenes, all the director needed to see was their lips moving), more time could be spent on the look of the film.

Contemporary Italian cinema is a shadow of its former self, but recent films such as Il Divo (2008), Le Quattro Volte (2010)  and Reality (2012) show that there's still some artistic life left in the industry.
Posted by Cary Watson at 9:01 PM