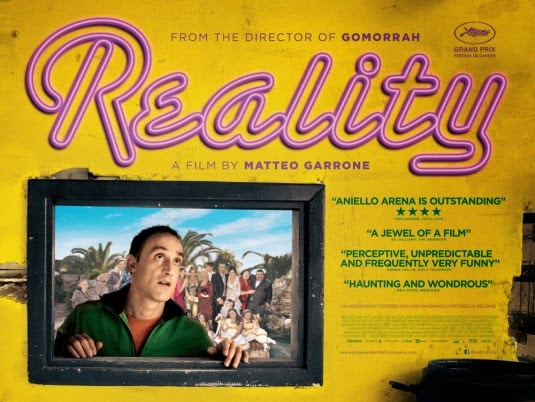 There's a certain sub-genre of films that takes a caustic look at people's lust for fame on the small screen. Titles like The King of Comedy, A Face in the Crowd, EDtv, and Being There come to mind, and now Reality, an Italian film by Matteo Garrone, the director of Gomorrah, stakes a claim to being the best of the bunch. Set in Naples, the central character is Luciano, a fishmonger who fancies himself a bit of an entertainer, largely thanks to his wife and extended family who think his silly drag act is hilarious. The film begins at a massive and eye-poppingly garish hotel/wedding hall/banquet centre, the kind of place that provides one-stop shopping for all your tacky wedding needs. Luciano is there with his wife and kids to attend a wedding, and he's about to make one of his beloved appearances in drag when a "celebrity" comes upon the scene. Enzo is the celebrity, a recent winner of Italy's Big Brother TV show (called Grande Fratello in Italy and insanely popular). Enzo has been paid by the hotel to press the flesh at the various weddings, sign some autographs, pose for pictures, and generally bless the weddings with the fairy dust of his fame. Luciano is smitten by his exposure to Enzo and, egged on by his family, he ends up auditioning for Big Brother. He actually makes it through to the next round of auditions, and his neighbours in his working-class area of Naples greet that news by treating him as a celebrity-in-waiting. It's from that point on that Luciano begins a slow and sad descent into something just short of madness. He starts to believe the show's producers are spying on him to find out what he's really like as a prelude to making their decision on his suitability for the program.

Reality succeeds brilliantly because it doesn't give in to the temptation to make its characters or the story too excessive, which is usually what happens when filmmakers take a swipe at TV. Films that take a critical look at TV normally set the ridicule dial at 11 and the subtlety knob at 0. That can make for some loud and preposterous films, Network probably being the best example. Reality keeps its feet on the ground, and becomes all the more powerful because Luciano's transformation from solid worker, loving husband and doting father to deranged wannabe reality TV star carries real emotional weight. Garrone avoids the usual trap of making fun of what's on TV or the people who create programs like Big Brother. We see glimpses of the show and the people behind it, but the emphasis is on how the will-o-wisp appeal of fame can drive the weak, the foolish and the greedy over the edge. In a revealing moment after his second audition, Luciano tells his family that the show's psychologist talked to each potential contestant for five or ten minutes, but in his case the shrink talked to him for an hour. Luciano takes this as a sign that he's on the short list. It's only later that we realize that the psychologist probably sensed something a bit "off" in Luciano's character and decided to give him a more rigorous analysis. Luciano does finally make it to the set of Big Brother, but it's not an appearance that anyone, including the audience, is expecting.

No film about television has ever looked this good. A conventional approach would have been to portray Luciano's world as drab and colorless, in contrast to the bright and shiny land of TV. Luciano lives in a world bursting with colour. The opening sequence at the wedding hotel looks like an explosion in a paint factory, as does a later trip to a water park, and Luciano's home and workplace are both eye-catching, the latter for its decrepit grandeur (it's an apartment in a decaying palazzo) and the former for its location in a lively square. The film isn't offering the tired thesis that its main character is seeking an escape from bland routine. What seems to grip Luciano is the idea of having a bigger stage on which to be himself.

The actors are all excellent, but there has to be special mention of Aniello Arena who plays Luciano. Arena made the film while on day passes from prison where he's serving a life sentence for a triple murder. He was formerly a member of the Neapolitan mafia and his victims (he denies the crime) were rival gangsters. Here's a story on him from the Guardian, and here's a trailer that gives a good taste of the film and it's excellent score.