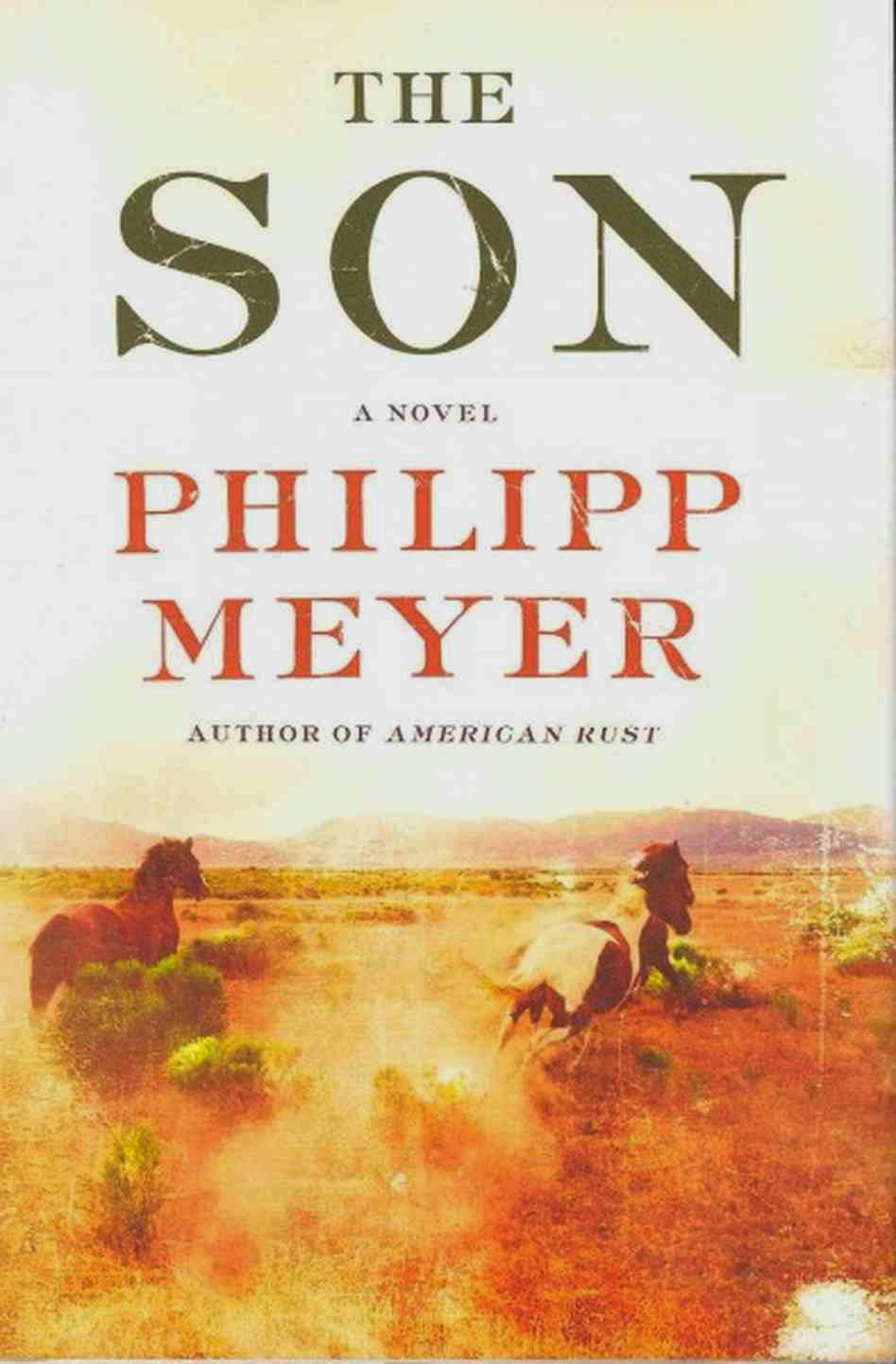 A lot of the reviews of The Son have labeled it as The Great American Novel. I won't give The Son that award, but it's definitely a great American novel. It's tempting to call it The Great American Novel because Meyer has taken a hard look at his country through the prism of Texas' history and decided that America's past, when reduced to its ugly essentials, is a story of rapacious colonization and the ruthless exploitation of labour and natural resources, with the wheels of both processes greased by violence and racism. The history of Texas provides plenty of examples to prove Meyer's thesis.

The Son is the story of the McCullough family, from their arrival in Texas as settlers in the 1830s right up to their eventual status as oil barons in 2012. The story is told through the voices of three different generations of McCulloughs: Eli, Peter and Jeanne. Eli is the founder of the family fortune. Captured by Comanches at the age of thirteen, he eventually bonds completely with his captors and becomes a warrior, happily taking white scalps along with his fellow braves. The Comanche, along with other Indian tribes, succumb to disease and white expansion, and Eli rejoins the white world and becomes a Texas Ranger. The grubstake Eli uses to make his fortune comes courtesy of his armed, and bloody, robbery of a Union supply column carrying gold. Soon after that he begins acquiring land in west Texas. Peter, Eli's son, is born in 1870 and his section of the saga covers the years 1915-17, during which the Texas Border Wars with Mexico are raging. Eli is still alive at this time (he lives to the ripe age of 100) and uses the wars as a pretext for slaughtering his neighbors, the Garcias, and stealing their land through a legal subterfuge. Peter is appalled by his father's actions and the moral character of his peers and state, and eventually makes a complete break with his family by disappearing into Mexico. Jeanne is born in 1926 and completes the family's transition (begun by Eli) from land and cattle to oil.

The Eli section of the novel is one of the great western stories in American literature, albeit one that probably owes a debt of inspiration to Thomas Berger's Little Big Man. Eli's story is exuberantly raw, bloody, violent and cruel. You could call this America in its proto-capitalist phase, when all you needed to do to get ahead of the other guy was to kill him and steal all his belongings, as well as slaughtering his family. Eli is the "son" of the novel's title. He's cursed with being a product of two patriarchal cultures. From his Comanche side he gets a high tolerance for the suffering of others and a fierce sense of tribal loyalty. From the American side he gets a burning desire to own and possess everything, and from both influences he receives lessons in the utility and pleasures of violence.

Peter is the first in the family's history to realize that their clan and caste are a curse upon the land. His tragedy is that his moral viewpoint isn't backed up by a high enough degree of moral courage. Peter makes an attempt to prevent his father massacring the Garcias, but, by his own reckoning, he doesn't do enough and finds he can't live with the guilt until an opportunity comes to redeem himself. Peter is the most complex character in the novel, and if it sometimes feels like Peter has wandered in from a William Faulkner novel, that's intended as a compliment to Meyer because parts of the novel are the equal of Faulkner.

The Jeanne section of the novel is the weakest of the three. It feels like Meyer just isn't sure what to do with this character or the story and ends up, well, faffing about a bit. Eli started his fortune entirely through violence, while the events of 1915 in Peter's part of the story shows the McCulloughs expanding their wealth through a combination of violence and legal trickery, and I think Meyer wanted to show how, over time, American capitalism was able to engage in thievery without the use of violence. At one point we learn that Jeanne has profited enormously from the savings and loan crisis of the 1980s, and there are hints she's involved in shady dealings in the Middle East, but this idea isn't fully developed. Instead, the story flits around without settling on a theme or central issue, and the climax, which involves a distant, and unknown, Mexican relative feels contrived.

Even with some bumps along the way, The Son is always compulsively readable. Like Texas, Meyer's writing is big and bold, but at the same time he can deftly and poetically describe the beauty of western landscapes or the intricate details of daily life in a Comanche camp. Parts of this novel are very raw and cruel, but this fits into the author's goal of showing the savage roots of American expansionism. I should walk that last statement back a bit and point out that Meyer also argues that violence and ruthless acquisitiveness are part of the human condition. Meyer does this by not sugarcoating his Comanche characters with any kind of  "noble savage" nonsense. They, like the invading whites, have a taste for theft and violence, and as several Comanche characters point out, long before the whites arrived the indigenous peoples were enthusiastically slaughtering each other. This isn't the Great American Novel, but if you paired it with Charles Portis' Masters of Atlantis (my review) you'd have the yin and yang of America, or perhaps what could be called the Great American Reading Experience.
Posted by Cary Watson at 5:56 PM