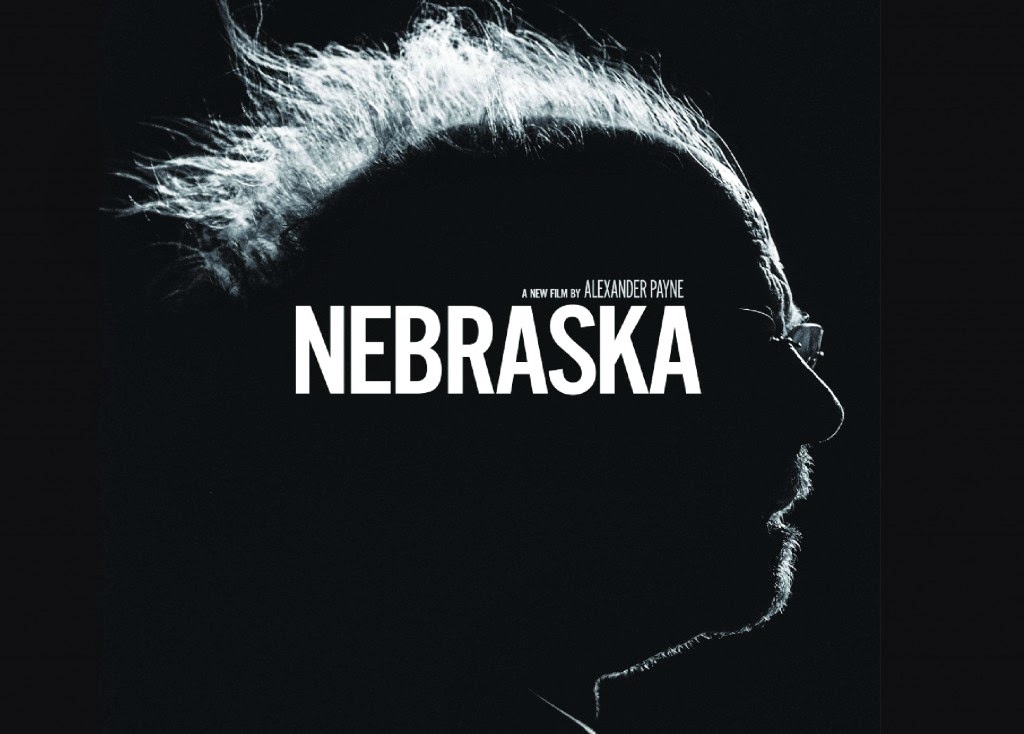 Somewhere in Hollywood there's a big, colour-coded map of the USA that shows what kinds of stories are permitted to be filmed in various regions of the country. On this map New England (tinted green) gets WASPy warmedies like Hope Springs and On Golden Pond. The South (peach-colored) gets brassy, sassy women givin' folks a piece of their mind in Steel Magnolias and Fried Green Tomatoes. Big cities (marked with large gold stars) get all the hyper-kinetic action movies and the broadest comedies. This leaves the Midwest and the Plains states (slate grey). They get bleak, austere tales of plain-looking people who stare moodily from car windows, kitchen windows and store windows (the latter typically plastered with "Going Out Of Business" signs) at flat, treeless landscapes, lightly populated with other people staring gloomily out of windows. This is the land of films like Badlands, Fargo, The Last Picture Show and now Nebraska, which has followed the rules of Hollywood's USA map to the letter.

Director Alexander Payne's Nebraska is as cliche-riddled as the most generic buddy-cop action movie and three times as dull. The thin-as-dental-floss plot has old guy Woody trying to get from Montana to Nebraska to claim a Publisher's Clearing House-type prize of one million dollars that he thinks he's won (he hasn't). His son drives him to Nebraska, and along the way there's a family reunion, of sorts, and, inevitably, a tepid father-son reconciliation moment at the very end. All the road movie and father-son relationship tropes are on full display: bickering; surprise revelations about dad's past; quirky characters; scenic detours along the way; and a settling of accounts with old enemies. And just to make sure all the cliche boxes are ticked, Nebraska gives us characters who are uniformly laconic, terse, and unemotional to the point of being catatonic. This, of course, is how Hollywood has traditionally viewed people who live in the "flyover states" and have the kind of jobs that involve manual labour and getting paid by the hour; and so in Nebraska the characters are essentially dead-eyed zombies, only instead of an appetite for brains they seek meatloaf. In short, what we have here are cartoonish caricatures, not characters. Payne wants us to snicker at most every character in his film; in fact, it's not going too far to say that he's actually showing contempt for them.

There isn't one moment or performance that rescues this film from total crapdom. The pace is lethargic, the humour is cheap and obvious, and the acting is all over the place in terms of tone. The key roles are done with professional polish, but the supporting characters give the impression they've been pulled in off the street. The disconnect in style between the two groups of actors is very jarring. Finally, why the hell is Bruce Dern up for a best actor Oscar? Is he nominated in a special category for Best Actors Who We All Thought Were Dead But It Turns Out They Aren't? All he does for most of the film is stare vacantly into the middle distance and say "What?" in a querulous voice whenever he's spoken to. Add this film to the long list of Hollywood products that see working class and lower-middle-class characters as something between buffoons and ciphers.
Posted by Cary Watson at 2:55 PM

Thanks for this very enjoyable review JC. Yeah... I had exactly the same vibe from the trailer, and so avoided the film. The numerous positive reviews it garnered also reflect the same demographic/class conceits I suspect.