Book Review: The Confession of Sultana Daku (2009) by Sujit Saraf 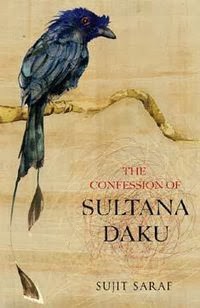 All the cool kids are writing historical fiction. Check over the long and short lists for the Booker Prize over the last ten years or so and you see a lot of novels set in the past, including winners like Wolf Hall, Bring Up the Bodies, The Luminaries and True History of the Kelly Gang. I don't know why this is so, but it seems to be a relatively recent development. It's hard to think of many celebrated writers from the 1920s through to the '50s who tried their hand at historical fiction. Sujit Saraf's previous novel was The Peacock Throne (my review), a big and brilliant novel about life in the Chandi Chowk area of New Delhi. The Confession of Sultana Daku is based on a true story and is set in the United Provinces of India in the 1920s. Saraf follows the titular bandit's short but spectacular criminal career from sneak thief to leader of a large and murderous gang. The activities of the gang eventually led to the British authorities taking notice. The army was called in, and after months of pursuit Sultana Daku was captured and hanged.

The novel is written in Sultana's voice, on the eve of his execution, as he tells his life story to an English officer who writes down everything he says. Sultana wants his life recorded so that the son he's never seen can learn what a great bandit his father was. Sultana's narrative is interrupted at times by entries from the officer's journal that describe some of the background to the manhunt.

The brilliance of this novel lies in its portrayal of Sultana. The bandit is boastful, self-pitying, occasionally delusional, and yet he remains a sympathetic character because we're aware that he's presenting himself this way because his audience is a British officer. Sultana's trying to impress a sahib, show him that his life counted for something despite being a member of one of India's lowest and most reviled castes, and at the same time he's reveling in the chance to have the undivided attention of a member of the one caste that rules all the other castes. In the background of the story, Ghandi and the Congress Party are taking the first steps on the road to winning India's independence and ending the culture and traditions that made Sultana a bandit, and make him feel privileged to speak with a sahib. As zero hour approaches for Sultana his mythomania drops away and he's revealed as a terrified man who'll beg and plead for his life. It's at this point that the novel fully captures the sadness and tragedy of life for India's "untouchables."

The political and social aspects of Sultana Daku give the story added depth, but what makes it additionally exceptional is Saraf's rich, vibrant prose. His descriptions of the land and people, the environment that Sultana swims in, are wonderfully realized, and it's no surprise that in an author's note at the beginning of the novel Saraf gives a mention to the books of Jim Corbett. Corbett was a hunter of India's man-eating tigers in the 1920s, and he wrote several books that are wonderfully evocative of the Indian countryside and sympathetic to India's peasants. Saraf even gives Corbett a cameo appearance in the story.

The only thing I can complain about is that this book needed an introduction to explain some of the historical background. Sultana is a victim of India's Criminal Tribes Act of 1871, and a full description of it off the top would have cleared up some confusion early in the story. A glossary might also be in order, although I don't really mind being thrown in at the deep end with novels about times and places that are foreign to me. But the fact that this novel has been barely reviewed outside of India (The Peacock Throne was widely reviewed outside of India) might be down to the fact that for a non-Indian reader much of the novel is going be tough sledding. Tough, but very, very rewarding.
Posted by Cary Watson at 12:05 AM